My final U2 360 show ended on amazing high note, more than I could have hoped for, more than I imagined – Larry hugged me on his way to the stage! So the first few songs on my last U2 360 show were pretty much a blur. It was a standard set list but then U2 ended the show with Bad, one of my favorite U2 songs – haven’t heard it since Chicago1 in 2009. So glad Bad is the last song I heard U2 perform. When Larry walked off the stage and toward the tunnel, he saw me, smiled and gave me a thumbs up – twice. It looked as if Larry was walking toward me, but then he was ushered toward the tunnel. So glad Larry smiling at me is the last image I have of the U2 360 tour. Please watch my video of U2 360 in Pittsburgh http://www.youtube.com/watch?v=Md6eL2aSHFw 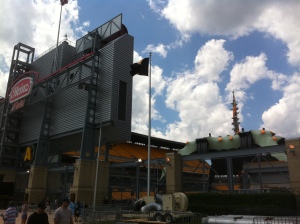 the Claw at Heinz field

I began today as I have for the previous 15 U2 360 shows – walked dogs, ate breakfast, watched tv, napped, ordered lunch and went to the stadium in the afternoon to wait for U2 to arrive. I met Abby and Anisha in the lobby of my hotel, and we took the shuttle over to the stadium at 2pm. It was a beautiful day – 80s, sunny, breezy, and not humid. I saw many friends old and new. But the surprise were Matt, Melissa, her parents and Kim. I had no idea they were coming and were very happy to see them – and it turned out to be very fortunate for me.

U2 arrived just around 5pm. Bono and Edge came out to greet the fans. I couldn’t get close enough to talk with them, but I did see Larry and Adam get out of their cars and walk inside. Matt and Melissa talked with Bono and selflessly told him about me and how I’ve driven to every US show and would like to meet Larry. Brian, Bono’s security guy, told them to wait there and he would see what he could do. Brian came out later and told me Larry was in a meeting, but he told Larry about me and Bono told Larry about me. Maybe Bono and Larry knew he was talking about me, since I talked with Bono in Seattle and Oakland about meeting Larry and Larry sometimes waves to me as he walks to the stage – and Brian said he’s seen me at the shows. Brian took my phone number and said he would look for us inside. Please watch this video of Bono greeting the fans and talking with Matt and Melissa (I did not shoot this video) http://www.youtube.com/user/MemphisMullen?feature=mhee#p/c/AAE35BC51599E88D/66/_f9qEsXM6Vw

Bono greets the fans in Pittsburgh

We went inside, and Abby and I waited on Edge’s side of the inner circle with Deb and her husband to wait for U2 to enter. Brian came over and told me that he was still working on getting me to meet Larry. Interpol didn’t take the stage until about 7:45 and played their usual set. I’m not sure when U2 came out, probably just about 9pm. When they walked out of the tunnel (on Adam’s side) I noticed that Larry wasn’t first as usual. Adam and Edge were first and Larry and Bono were behind them, so I kind of thought something was up. But then somehow Larry moved up front. As Larry walked up the ramp, he locked eyes with me and was smiling. He walked across the platform and then down to me and hugged me. He didn’t say a word, he just put his arms around me. I think I muttered a ‘thank you.’ Larry gave me the biggest, best hug ever and then went on stage. I burst into tears, as I am doing now while writing this. Everyone around me congratulated me and hugged me, which made the moment even more special. I was so excited that I don’t really remember Even Better Than the Real Thing or The Fly. I don’t think I came to until Mysterious Ways when Larry’s drum kit turned around and faced me behind the stage. I never thought Larry would walk over to me and hug me on his way to the stage before the show. If anything, I thought he may shake my hand after the show walking off the stage on the way to the tunnel. Please watch Deb’s video of Larry walking over to me http://www.youtube.com/watch?v=phshdCyqDXs  Please watch this video of Larry hugging me – it’s not close up, but you can see it at the end in the far right side behind the squiggly lines (I did not shoot this video)   http://www.youtube.com/watch?v=FjYuBeC6OUg

Look at Larry’s eyes looking over to me 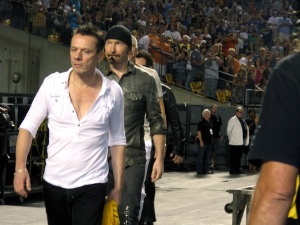 he’s getting closer (photo by Tony Chiappetta at http://t.co/yAXyNgd) 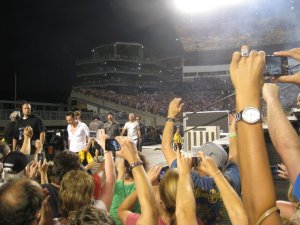 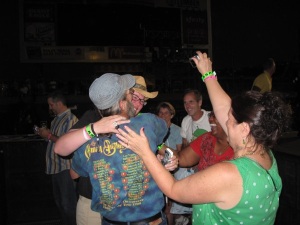 Everyone hugging me right after Larry hugged me. (photo by Tony Chiappetta at http://t.co/yAXyNgd) 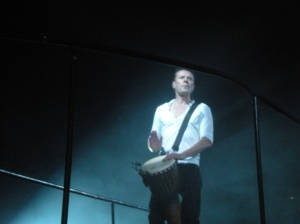 the last Claw in the US 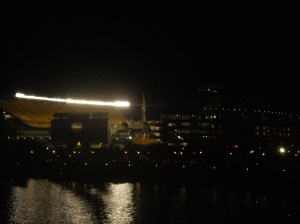