I really enjoyed my 28 1/2 hour runner in Pittsburgh. There was no traffic driving to and from Pittsburgh, I had a great hotel, enjoyed some of the sites, hung out with old friends and of course got to see/hear a great U2 show! I left my house at 6am Wednesday morning the day of the show and was [continue reading] 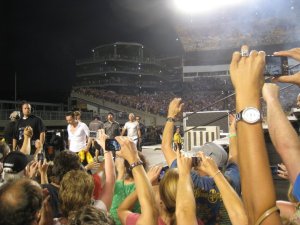 DAYS 72&73 – JULY 24&25 I left Minneapolis just before 11am the morning after the U2 show. I was in a great mood because it was such a great show, but I was exhausted. I stopped one time in Wisconsin before stopping for the night at a Motel 6 in Joliet, Illinois. The next day I drove [continue reading] 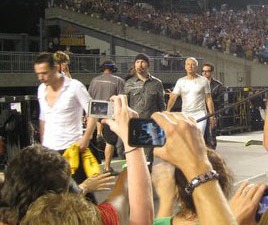 One month ago tonight my musical journey on the U2 360 tour came to an end, and I finally found what I was looking for. After driving over 18,000 miles through 31 states to attend all 16 U2 shows in the US wearing my ‘Larry Mullen Band’ shirt to each one, Larry hugged me on his way the [continue reading]

It was one week ago tonight that my Musical Journey ended with Larry hugging me on his way to the stage of the last show in the US on U2’s 360 tour. I keep replaying it over and over in my head. Larry walked toward me, smiling, jumping down to me, putting his arms around me without saying a [continue reading]

My final U2 360 show ended on amazing high note, more than I could have hoped for, more than I imagined – Larry hugged me on his way to the stage! So the first few songs on my last U2 360 show were pretty much a blur. It was a standard set list but then U2 ended the show with Bad, one of my [continue reading]

Tomorrow I leave for the U2 360 tour, a journey that I have been planning for over a year. I am so excited! For 2 ½ months I will be driving with my 2 dogs, Elvis and Cilla, across America to all 16 US shows. Along the way, meeting great people and visiting great places – writing about all of my [continue reading] 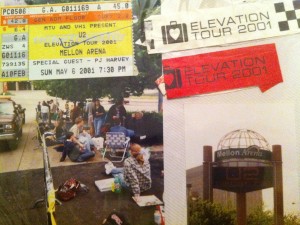 Sunday May 6, 2001 Pittsburgh, PA I flew to Pittsburgh and was in the GA line at the Mellon Arena by 9:30am. Insane! I met a lot of great people including Tasha and Frank. I almost knocked myself out when I hit my head on the metal barriers. So embarrassing and it really hurt! The U2 show in [continue reading] 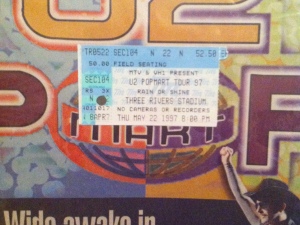 My first Popmart show was on May 22, 1997 at Three Rivers Stadium in Pittsburgh, Pennsylvania. I had just graduated from college a few days prior – finally! Mike, his girlfriend and I drove the five-hour drive from Baltimore. While waiting outside the stadium I met Ken, one of the guys on the [continue reading]