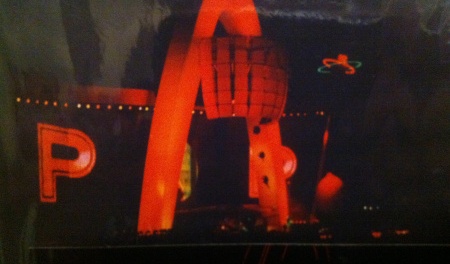 Pop was released in March of 1997. I remember seeing the video for “Discotheque” and loving it because U2 was dressed like The Village People. A lot of people criticized Pop for being too techno and not enough of like U2, but I really liked it. The lyrics were just as strong as always. In fact, one of my favorite U2 songs of all time, “Gone,” is from Pop. My other favorites from Pop are “Staring at the Sun,” “Please,” “Discotheque,” and “Last Night on Earth.”

U2 started their Popmart Tour in America in support of their new album Pop. For this tour I again went to 8 shows, but I traveled further than I had for ZooTv. I had just graduated college and just broken up with my boyfriend. Fun Lovin’ Criminals, who had a song out called “Scooby Snacks,” opened the six shows I saw on the first leg of Popmart. The setlists for these Popmart shows were pretty much the same, but were quite different from ZooTv. The order of songs were changed all around and of course all the new songs were played, but the most unique performance was Edge singing karoke to either Sweet Caroline or Daydream Believer.

I really enjoyed the Popmart tour. I don’t think it gets the credit it deserves, but there were some great performances. It was visually pleasing as well. There was a giant golden arch like McDonald’s, a giant martini and a giant discoball traveling lemon that brought Larry, Bono, Edge and Adam to the encore. It was also the only time I have seen the band in a uniform of sorts. They each had their own tee shirt: Bono was Bono Man, Larry was Hit Man, Adam was Pop Tart, and Edge was Mr. the Edge. And by the end of tour, “If You Wear That Velvet Dress” became one of my favorites off Pop. 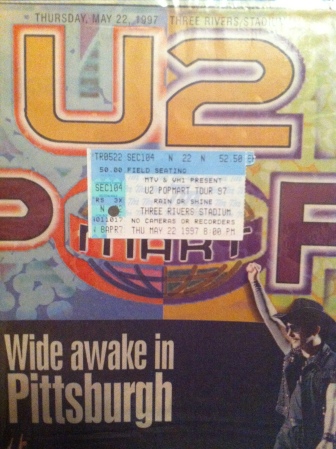 My first Popmart show was on May 22, 1997 at Three Rivers Stadium in Pittsburgh, Pennsylvania. We I drove the five-hour drive from Baltimore. While waiting outside the stadium I met Ken, one of the guys on the crew who drove one of the trucks that carried parts of the elaborate Popmart stage from city to city. Ken was to be a source for a couple cool U2 experiences. A couple of days later, we drove three hours from Pittsburgh to Columbus, Ohio for our second Popmart show on May 24, 1997 at Ohio State University. We saw Bono get off the bus, but he was swarmed by fans. It wasn’t orderly as it had been on ZooTv. We got a few pictures though. We also signed the banner hanging outside the stadium. Our seats weren’t too close for this show. 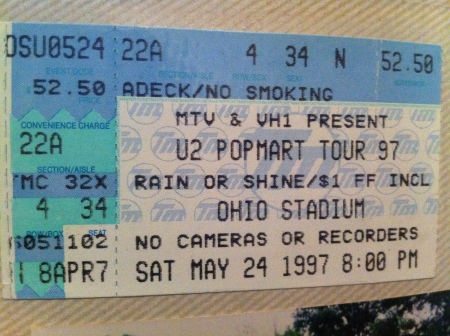 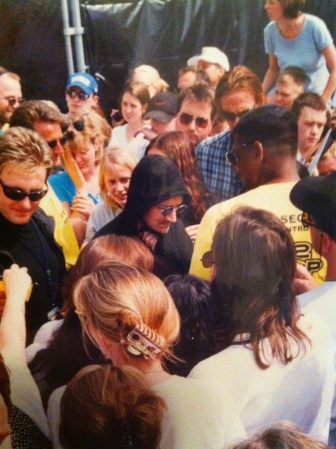 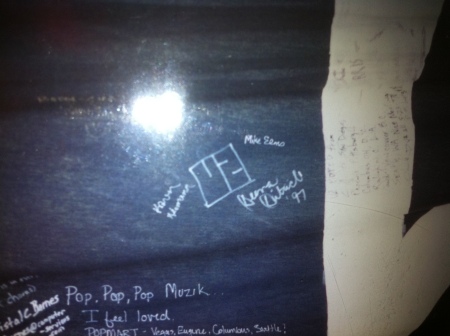 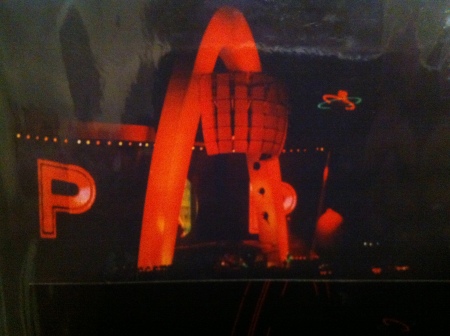 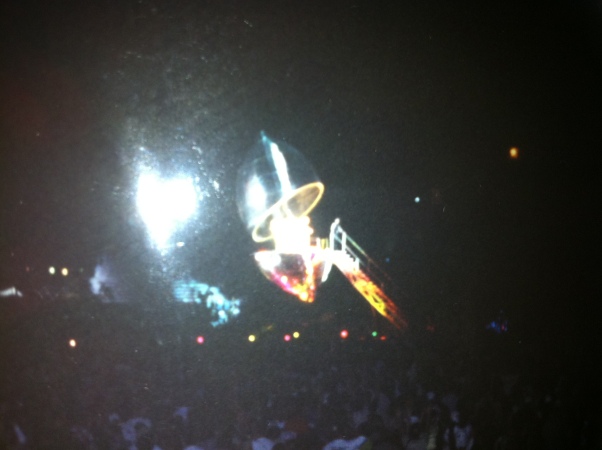 The Popmart show at RFK Stadium Washington, DC on May 26, 1997 was great. I was 5th row from the stage. Everyone I knew was there, since I had gotten tickets for most of my friends. It rained as it had on ZooTv, but it really poured this time. The set list for this show was the same as the ones in Pittsburgh and Columbus, except Unchained Melody was not played in Columbus and Edge sang Sweet Caroline in Pittsburgh. The set list for Popmart DC was as follows: Mofo, I Will Follow, Even Better Than the Real Thing, Gone, Pride, I Still Haven’t Found What I’m Looking For, Last Night on Earth, Until the End of the World, If God Will Send His Angels, Staring at the Sun, Daydream Believer (Edge Karaoke), Miami, Bullet the Blue Sky, Where the Streets Have No Name / Playboy Mansion, Discotheque, If You Wear That Velvet Dress, With or Without You, Hold Me Thrill Me Kiss Me Kill Me, Mysterious Ways, One, Unchained Melody. 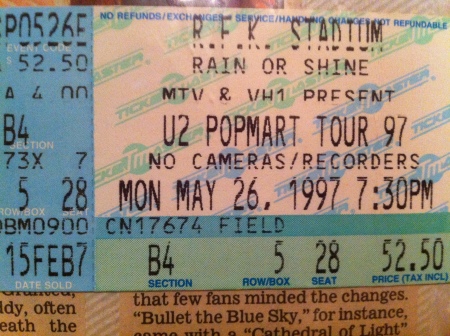 My next Popmart shows were at Giants Stadium in New Jersey on May 31 and June 1. My friend Laurie went with me. We were on the floor for the first show, but our tickets were in the stands on the side of the stage for the second. Ken, the crew member I had met in Pittsburgh, walked us down to the floor for the second show, so we could be close to the stage. As he was walking us around, it was time for the band to come out. We were walking around behind the stage as the guys were walking out. We stood right at the stairs as Larry, Bono, Edge and Adam walked onto the stage. I wasn’t allowed to scream obviously. I almost passed out from holding in my excitement. It was at this second show on June 1 that Bono and Edge performed Staring at the Sun acoustically for the first time. 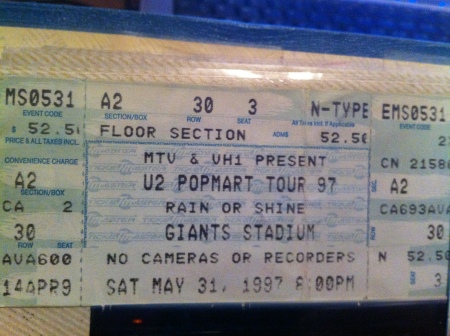 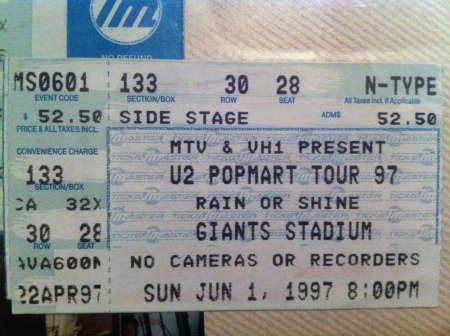 My 6th Popmart show, and final one on the first leg, was on June 8, 1997 at Franklin Field at the University of Pennsylvania in Philadelphia. I went to this show with my best friend Cindy. We arrived to see Bono and Larry get off the buses, but like in Columbus they were swarmed by fans and we couldn’t get close. I managed to get a couple of pictures though. 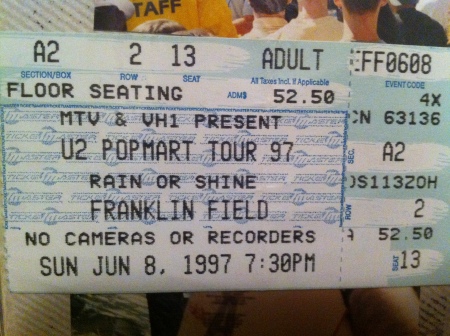 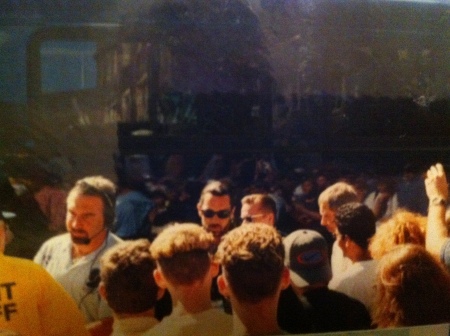 Ken invited me out to Oakland for the U2 show. I went, but for a reason that escapes me now we didn’t go to the show. I did meet Fenton, of Rattle and Hum’s ‘could you pass me a tissue Fenton’ fame, and I got a VIP laminated pass for the show, but we never went to the U2 show. I remember having a great time exploring all around San Francisco, but no U2 show. I would have to wait a few more months for another Popmart show. 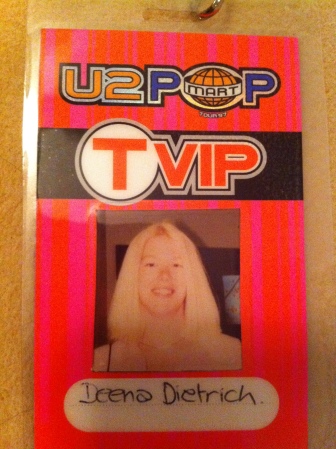 I traveled to Florida for the third leg of the Popmart tour. My parents have a condo in Ft. Myers, so I had a free place to stay. We flew down to attend the shows in Tampa and Miami, both about a two hour drive from Ft. Myers. At the time, the Popmart show at Houlihans Stadium in Tampa on November 10, 1997 was my favorite U2 show I had seen, including all of ZooTv and Popmart. I think mainly because I stood right on the b stage, rather than staying in my seat. There was nothing between me and the stage. And for Popmart, U2 entered through the crowd and onto the b stage. I thought they sounded better than the shows I had seen on the first leg. It was raining and the top deck of the stadium was empty, but it was a great show! Third Eye Blind opened, and I really liked them. Instead of karaoke like in the first leg, Edge sang Sunday Bloody Sunday, and a belly dancer from the audience came on up on stage for Mysterious Ways, like during ZooTv. I didn’t know it at the time, but that belly dancer was Melissa Pruitt who would become my friend four years later. A few days later on November 14, 1997 we drove over to Pro Player Stadium in Miami for my last Popmart show. We again did not stay in our seats and stood right at the b stage. I grabbed onto Bono’s leg (sort of hugged it actually) as he leaned over into the crowd. Although I have always been a Larry fan, I was really digging Bono during Popmart. The set lists for both the Tampa and Miami Popmart shows were the same (except they played Miami in Miami): Mofo, I Will Follow, Gone, Even Better Than the Real Thing, Last Night on Earth, Until the End of the World, New Year’s Day, Pride, I Still Haven’t Found What I’m Looking For, All I Want is You, Staring at the Sun, Sunday Bloody Sunday, Bullet the Blue Sky, Please, Where the Streets Have No Name, Discotheque, If You Wear That Velvet Dress, With or Without You, Hold Me Thrill Me Kiss Me Kill Me, Mysterious Ways, One, Wake Up Dead Man. 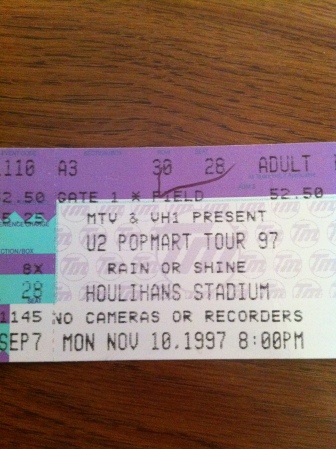 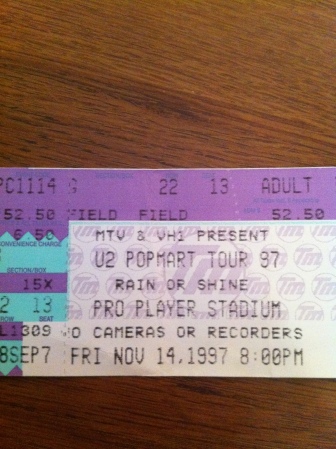