Larry Mullen Jr attended the Ft. Lauderdale International Film Festival last night via Skype. He was named FLIFF’s ‘Star on the Horizon’ for his starring role in Man on the Train. He answered questions from the audience and talked a bit about the film. I learned of this event a month ago, but decided not to attend because Larry wasn’t actually going to be there, plus I just moved back to Maryland and had to get settled.

Luckily my friend Patty Atkinson, who I met this summer on the 360 tour, and fellow Larry lover and U2 fan, told me she got a ticket and was heading a half hour from her home in Miami to attend. Patty was nice enough to email me all the details of the night – along with a short video and a couple of pictures. Patty graciously allowed me to post her email, video and pictures on my blog, so we could share with everyone. Here is what Patty had to say about Larry at FLIFF last night,

Well, I didn’t actually get to meet him tonight, or to ask any questions. It wasn’t as interactive as I’d imagined. But it was really exciting to see Larry live on Skype in the theatre. And the movie was a nice surprise. Not sure what I expected, but I really got into it.
Details as much as I can remember—
The Man on the Train was being considered the “centerpiece” and major movie event of the Ft Lauderdale International Film Festival this year. Tonight they were showing the film at a smallish but older old-fashioned movie theatre. It was sold out, so glad I got my ticket in advance! Supposed to start at 7, but it was late. I didn’t mind the wait cause they were playing Pride and a couple other U2 songs. Finally started with intro to Larry, U2, etc about 7:15. The host doing the intros made a stupid comment that Larry was born in 1980. I said no, 1961 and a bunch of people turned around and looked at me strangely. (much older/mostly retired audience with some younger U2 fans thrown in). He did mention he had seen U2 22 times and he had done some photography for them, but I didn’t catch the host’s name. Also asked for show of hands in audience who had seen U2, about half raised their hands. He said the other half should be ashamed of themselves!
Larry was then suddenly on the big theatre screen via Skype. Appeared to be sitting on the floor in his hallway or empty room of his house. He did say he was in his house in Dublin, on the north side, not the nice side. Of course, wearing a white shirt, unbuttoned, and looking a bit tired I thought. Later realized it was maybe 1-2 a.m. there in Ireland. I freaked out at first, couldn’t get my camera to work right, and ended up with a short video and pic via iPhone. Most people were not taking photos. Larry was only on screen via Skype for less than 10 minutes. They asked a few questions (prearranged) -where are you right now (in house in Dublin), what was it like working with Donald Sutherland (good because he didn’t try to offer advice), etc. A couple of the producers were there and said hello. Larry said hello back to them. He said he couldn’t see the audience or speakers via Skype, but smiled and nodded his head when he was told we were all waving to him. After a few short minutes they presented him with a newcomer award called the Star on the Horizon award for best new actor. He seemed to think that was funny. And then they asked him to talk about the movie a bit. He then described the basic scenario (see my 2 minute wobbly video on Facebook). They thanked him. He smiled. the end. He was gone. I tried to catch his Skype name and/or other details. Cause I”m sure I”m going to try and Skype him later!
The movie started promptly after the Skype call ended. I really hadn’t heard a lot about it, cause I purposefully like to see movies before I read or hear too much. I confess I spent a lot of it paying attention to Larry, looking at his hair, hands, feet, eyes, jacket, earring etc. and not as much time paying attention to the dialog. Need to see it again! But, I did enjoy it, even though I don’t think it was a movie I’d ordinarily watch. The acting I thought was great, and Larry was better than I expected (whatever that was). I’d love to see him do some more acting now!
After the movie, everyone went to a bar/club down the street for buffet and music. Music was disappointingly a guy in the corner with a guitar playing Tom Petty songs. I talked to one of the producers briefly, and that’s about it. Didn’t hear anything much about Larry at the after party, but thought it was interesting to go. 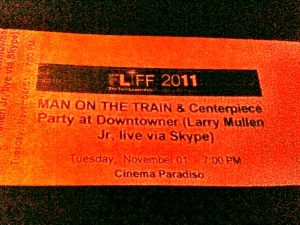 Please watch Patty’s video of Larry at FLIFF via Skype last night. Thanks SO much for sharing Patty!