The first leg of the Elevation tour is over, and I am very sad. I drove up to New Jersey around 6:30pm Wednesday night and met Tasha at the hotel around 10pm. We got up early Thursday morning and were in the GA line at Continental Airlines Arena by 6:15am. I was number 30 in line. Tasha tried all day to get a GA, but couldn’t so she stayed in her seat behind the stage. I stood at the rail in front of Adam – again. 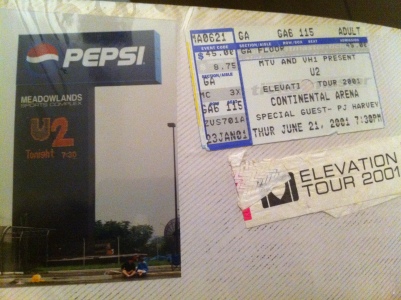 Jersey1 on June 21st was a great show! A girl two people down from me had a sign that read, “Larry May I please have your drumsticks?” Right after Walk On, Larry hopped up and walked right over to her. I took a great close up picture as Larry leaned over to give her his drumstick. Then he looked right into my eyes and nodded. I leaned further than anyone. He gave me his drumstick. I mouthed Thank You So Much. He again nodded. As soon as I got the drumstick, I teared up. Then I looked up at Tasha in her seat behind the stage and we both started jumping up and down. Then I just walked back into the middle of the heart by myself and started to cry and shake. Best moment of the tour for me! I exited the arena clutching my drumstick that Larry gave me after looking into my eyes. I met up with Tasha outside, and we hugged and squealed. I told her the story, and then she cried. I couldn’t get to sleep until about 2:30am and woke up 2 hours later for the final show on this leg of the tour.

Larry giving me his drumstick in Jersey

Elevation Jersey1 6.21.01 Set List: Elevation, Beautiful Day, Until the End of the World, Mysterious Ways, Kite, Gone, New York, I Will Follow, Sunday Bloody Sunday / Get Up Stand Up, In My Life / Stuck In a Moment, In a Little While, Desire, Stay, Bad / Wild Horses / 40, Where the Streets Have No Name, Pride, Bullet the Blue Sky, With or Without You, The Fly, One, Walk On. 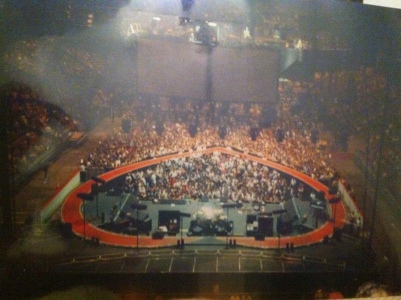 We were in the GA line by 5am Friday for the last show. I was number 14 this time. We went over around 3:30pm to wait for U2 to come in, but at 5:15 they had not arrived yet so I got back in the GA line. Five minutes after I left, Larry arrived and signed autographs for everyone. I stood at the rail two people to the right of Bono’s microphone. PJ Harvey opened. 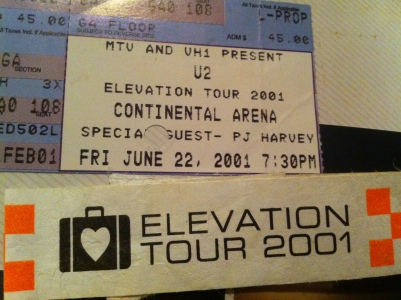 Jersey2 on June 22nd was absolutely amazing! U2 played Wild Honey for the first time. Daniel Lanois played with them on Ground Beneath Her Feet and Wild Honey. Bono finally did the extra verse to With or Without You – ‘we’ll shine like stars in the summer night.’ I got Adam’s fake pick from Dallas. I made a sign that simply read, “Thank You Larry!” I held it up as they walked on stage, and Larry nodded. Then I held it up at the end of Beautiful Day (or Until the End of the World) and Larry nodded and smiled. After the show, I held up the sign again and patted my heart, Larry saw and smiled and nodded again then walked off the stage.

Tasha and I decided to wait for the band after the show. Larry left around 1:30am, but we couldn’t really tell it was him in the car. By 3:30am, Tasha and I were the only ones left outside the arena. Not sure why we were still waiting. I think we were in denial about the tour ending. After being up for 24 hours, we finally went to sleep.