I started the third leg of the Elevation Tour in my hometown of Baltimore, and am going to the next 7 shows. The U2 show at the Baltimore Arena on October 19, 2001 was absolutely amazing! The best I’ve seen out of ZooTv, Popmart and the first leg of Elevation! Our adventure started Thursday when me, Jennifer, John, Tasha, Dan and Jenny met downtown for dinner to celebrate Tasha’s birthday. After, we drove by the arena to check out the GA line. There were already about 50 people in line at 10:30pm. Jenny and Dan got in line while the rest of us went back home to get our stuff. We got in line around 1:30am. We had fun hanging out with everyone, but it was quite cold. Tasha and I slept in my car for about an hour. 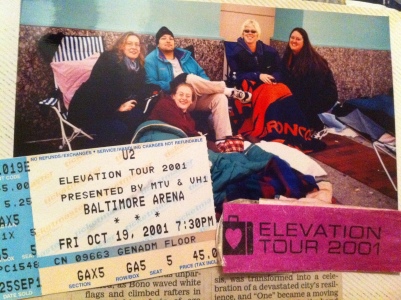 We went over to meet the band around 3pm. They finally came in at 4:30pm. I videotaped them driving in, Bono walking out, Edge walking out, Larry walking out, Adam walking out, and all of them signing autographs. We could barely believe that they were all four outside signing autographs. This was the first U2 played Baltimore and they all four came outside to meet all the fans. Adam signed Tasha’s purple pants. She was VERY excited. He said, ‘They’re great ones.’ When Larry came one person away from me, his bodyguard told me to turn off the videocamera. So I did not get video of my encounter with Larry, but Tasha took a great picture of it. Larry walked to me. I said, ‘I don’t have anything for you to sign, so can I have a hug?’ Larry looked at me a little strange, then smiled and said yes. Then we hugged and it was a nice, strong hug. In the picture, Larry has a big smile on his face. After the hug, I thanked him. Tasha hugged me and then I cried like a baby. I was so overcome with emotion. I had been waiting to meet Larry for 14 years! 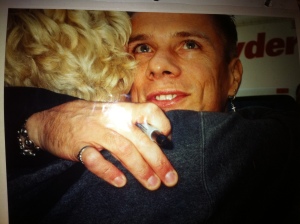 Larry hugs me in Baltimore

Bono talking to me in Baltimore

The concert itself was so unreal! We stood at the tip of the heart on the outside. It was me, Tasha, Jenny, Cathy, and Kate. Garbage was supposed to open, but the drummer got sick, so Graham Parker & the Figgs filled in at the last minute before heading over to their own show. As soon as ‘All You Need is Love’ came on, the crowd went wild, and even crazier for ‘St. Pepper’s.’ And then ‘WOO-OOH-HOO! ELEVATION!’ During ‘New Year’s Day,’ Cathy and I held up her American Flag that she had brought. Bono took it from us. He hugged it. He looked at me and said, ‘You take it back.’ He handed it back to me so gently. He said, ‘Thank you.’ I said, ‘Thank you.’ Then he started walking away, turned to me, gave me the peace sign and nodded. Best Bono concert moment EVER for me. I have a fantastic picture of the Bono hugging the flag. Song highlights of the Baltimore show for me were: I Still Haven’t Found What I’m Looking For (I cried), Pride (with MLK’s speech a la ZooTV), Out of Control, Staring at the Sun and Please. A guy behind us was pulled up on stage to play Knocking on Heaven’s Door with the band. During One, all of the names of the passengers on the flights from 9/11 were displayed – and then they went right into Peace on Earth. I cried through all of this. They ended the show with Walk On. It was the most emotional and spiritual and uplifting U2 show. Just unbelievable!

Tasha & I singing in Baltimore 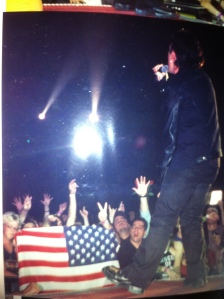 holding the flag in Baltimore 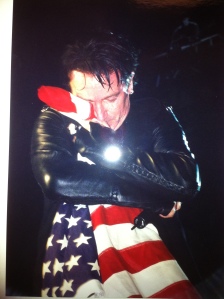 Elevation Baltimore 10.19.01 Set List: Elevation, Beautiful Day, Until the End of the World, New Year’s Day, Out of Control, Sunday Bloody Sunday, When Will I See You Again / Stuck In a Moment, Kite, Angel of Harlem (full band-electric), Knockin’ On Heaven’s Door (full band), Staring at the Sun (acoustic), Please, Where the Streets Have No Name, I Still Haven’t Found What I’m Looking For, Pride, Bullet the Blue Sky, What’s Going On, New York, One, Peace On Earth / Walk On.