I flew up to Albany and hung out with Tasha and her sister all afternoon outside the Pepsi Arena. I met a bunch of people from the U2 internet community. I also saw Bono drive in for the sound check.

I saw this Elevation show from the seats, on the side of the stage. PJ Harvey opened. Bono’s voice was rough, apparently he was sick. There were a lot of changes in the set list. U2 played Mysterious Ways after Until the End of the World. The Fly was performed in the first encore. Unchained Melody was played after One. The Beatles’ In My Life was played before Stuck in a Moment. Van Morrison’s Gloria was played after Desire. And they played Gone! But they did not play New Year’s Day, In a Little While or Sweetest Thing. 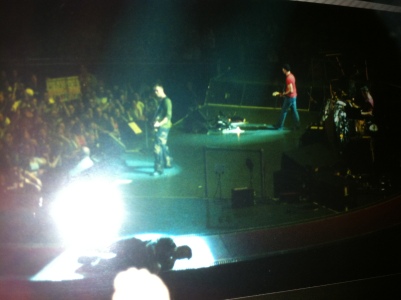 Bono laying down in Albany

Larry in black and white in Albany

Elevation Albany 6.2.01 Set List: Elevation, Beautiful Day, Until the End of the World, Mysterious Ways, In My Life / Stuck In a Moment, Kite, Gone, New York, I Will Follow, Sunday Bloody Sunday / Get Up Stand Up, Desire, Stay, Bad / 40, Where the Streets Have No Name, Pride, Bullet the Blue Sky, With or Without You, The Fly, One / Unchained Melody, Walk On.