The U2 360 show in Minneapolis was fantastic – a great energy even through the pouring rain and lightning. It ended my ‘no rain’ streak – 14 shows this summer with no rain. Tonight’s highlights for me were a full performance of Stand By Me with K’naan, Stuck in a Moment (dedicated to Amy Winehouse) instead of Stay, and Larry smiling and waving to me as he walked on stage and as he left the stage. 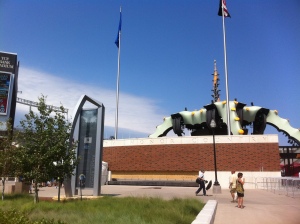 the Claw in Minneapolis

My hotel in Minneapolis was literally right next to TCF Bank Stadium, so I stayed in bed until 2pm and then got ready and walked over to the stadium. I walked around the entire stadium trying to figure out where U2 would drive in. I thought it might be this spot in the back, but continued around to the other side of the GA line where I saw the crew going in and out and a bunch of fans waiting. I finally met Wendy whom I’ve been chatting with on twitter and facebook for months. I also met Stuart and Paul and talked with Jason, Tim, Cathal, Suzi and Denise. I met Jill and her friends who were also at the shows in Anaheim. Turns out I should have followed my instinct and stayed in that spot around the back of the stadium where I thought U2 would drive in because that’s where they came in and I missed them – but no one stopped anyway. 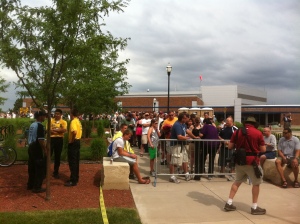 I went into the show around 6pm and went to Edge’s side of the inner circle so I could watch U2 walk to the stage, even though they were entering from the tunnel on Adam’s side I prefer to watch them walk under the stage – which is on Edge’s side. Deb and her husband were already there waiting. We ended up hanging out during the whole show, which was great fun. A guy from the crew told us they have names for each of us, but he wouldn’t tell us what they were as I am sure they are not flattering. He said they even play bingo and mark off spaces when they see us at a show. I told him to tell Larry I’ve been to every US show. He said he hasn’t even met Larry. 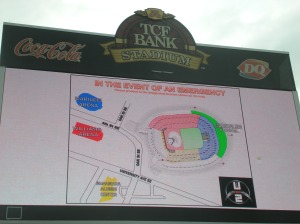 As U2 walked toward the stage and made that turn to go into the underworld, Larry saw me and smiled and waved just like he did in St. Louis. I sort of captured it on video, but didn’t get a picture of it. My friends sitting behind the stage saw him wave to me, so I know I’m not imagining it. Please watch my video of U2 entering TCF Bank Stadium in Minneapolis http://www.youtube.com/watch?v=Y7Wv4VpBy5s

It started to rain toward the end of Mysterious Ways and continued throughout the show, raining harder and harder and lightning during the encore. It seemed that the pouring rain caused Larry lots of problems – he was constantly adjusting his seat. Also because of the umbrellas, Larry’s drumkit didn’t turn around during Sunday Bloody Sunday. Edge didn’t seem to like the rain at all. He didn’t go on the bridge during Until the End of the World, even though Bono was on the other bridge waiting.

Before the band introductions, Bono mentioned that Minneapolis was originally supposed to the be the last show of the tour, then they added 2 more shows – he said, ‘let’s start the end of the tour party tonight.’ Please watch my video of Bono’s band introductions http://www.youtube.com/watch?v=LZfiuKl8mvM  With the help of K’naaan, U2 played a full version of Stand By Me after I Still Haven’t Found What I’m Looking For. Please watch my video of Stand By Me http://www.youtube.com/watch?v=Rz1pwG8qfq0

U2 played Stuck in a Moment instead of Stay and dedicated it to Amy Winehouse after the news of her death earlier in the day. I like hearing Stuck much better than Stay. Magnificent was not played. Please watch my video of Bono and Larry singing LET ME IN THE SOUND from Get on Your Boots http://www.youtube.com/watch?v=TkdlGwyeNt0  Please watch my video of Larry starting I’ll Go Crazy if I Don’t Go Crazy Tonight http://www.youtube.com/watch?v=WjU7oaIWPIw

I didn’t walk around to Adam’s side to wait for U2 to leave because I was afraid I would fall in the pouring rain on the way over. Instead, I stood at the stairs and watched U2 leave the stage. Larry again saw me and smiled and waved. The picture below is right after he waved to me.

The U2 show in Minneapolis was great – a fantastic energy much like it was in St. Louis. The rain didn’t damper the experience at all. In fact, it may have even made it better – and my hat survived the downpour. Please watch my video of an overview of the U2 360 show in Minneapolis (uploading now)

I left the next morning to drive to Joliet, Illinois, then today I drove to Pittsburgh for my last U2 360 show tomorow. I have seen 15 great shows (about 5 of those were epic), so whatever the show in Pittsburgh is will be icing on the cake. It will be my last chance to meet Larry, but if that doesn’t happen it’s ok. Larry shook my hand last month in Seattle as he was leaving the stage, so that was fantastic. Plus 10 years ago on the Elevation tour, Larry hugged me, gave me his champagne bottle and gave me his drumstick. I’m very lucky.