Even though it was a cold, windy and then rainy day, today was a great day. Today we went to Mount Rushmore and Crazy Horse monuments. Mount Rushmore was the first place I planned to see, other than U2 shows, when I started planning this trip last year. Mount Rushmore was everything I dreamed it to be. It was more than just the faces on a rock, although that was amazing and I just wanted to stay there all day and marvel at it. The Mount Rushmore memorial is situated in a beautiful setting with lots to do. We watched a movie about it, walked the President’s Trail around it, had lunch in the cafe and bought books and souvenirs in the bookstore and gift shop. I loved it! 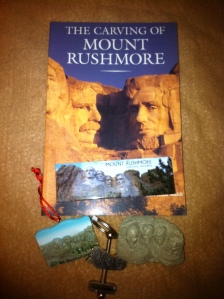 After our wonderful time at Mount Rushmore, we left for the Crazy Horse memorial just a short drive away. I had no idea what to expect but I knew it was something I should see. The Crazy Horse memorial was much more than I expected. Besides the unfinished memorial that will take decades to finish, which is the largest monument in the world, there is a large visitor center dedicated to honoring Native Americans and the family that built the Crazy Horse memorial. I was fascinated by the story of this man who dedicated his life to building this memorial and then his family followed in his footsteps. 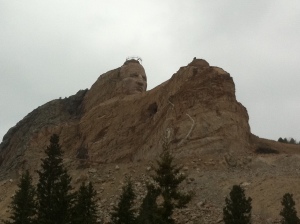 We left Crazy Horse tired and cold wanting to go back to our hotel for a bit to rest before dinner. Rather than go back the way we came, we continued around the circle which ended up taking us through Custer National Park on the most treturous road on which I’ve ever driven. It took us over an hour to drive 34 miles, but along the way we got to see Buffalo. I was a bit terrified they were going to charge us. The one I was taking a picture of looked me in the eye – and not fondly.

After finally making it back to our hotel, we rested for a bit and then had the most fabulous dinner at Ruby House Restaurant in Keystone. Ruby’s looks like an old brothel, complete with red velet wallpaper and a saloon. I had salmon en croute, which was amazing! A generous portion of perfectly cooked salmon wrapped in a yummy pastry topped with a creamy wine sauce – fantastic!