Larry is the only band member on the cover of U2’s new album, and his tatoo is prominently featured. A rendering of his tatoo is on the cd and the record. The Larry Mullen Band indeed! Actually, it is Larry and his son Aaron Elvis (who now just goes by Elvis which is so fantastic!) are on the cover of U2’s Songs of Innocence. Bono calls this the most personal record U2 has ever made, and I have to agree. Songs about Bono’s mom (“Iris”), where he grew up (“Cedarwood Road”) and their first concert (“The Miracle of Joey Ramone”).

For such a personal record, U2 released it in the most public way. Songs of Innocence was the biggest album release in history, going out to one half billion (that’s billion, not million) people for free on iTunes on 9.9.14. This caused quite the controversy. People were very ungrateful saying they didn’t want a free cd automatically in their playlist (even though it was on the cloud not taking up space). U2 fans were thankful for the completely unexpected gift a month before the physical release. Yesterday Songs of Innocence was released on cd, a deluxe double cd and a double white-vinyl LP, the latter two with additional songs and a 24-page booklet.

I was instantly and thoroughly impressed with Songs of Innocence the very first time I listened to it, and that doesn’t happy often. I usually have to listed to an album a few times before I fall in love with it. At first listen, “Cedarwood Road” immediately struck me with that driving, hard guitar. Now, after about 100 plus listens, “Song for Someone” is my absolutely favorite – and I don’t see that changing. The lyrics are just simply beautiful “If there is a light, You can’t always see. And there is a world, We can’t always be. If there is a dark, That we shouldn’t doubt. And there is a light, Don’t let it go out.” That’s my new favorite line “there is a light, don’t let it go out.” Oddly enough though, I am not a fan of the acoustic version of “Song for Someone” on the deluxe double cd. It’s just not the same without Edge’s beautiful voice, not the same passionate feel which is what makes the song for me. Conversely, I absolutely love the acoustic version of “Every Breaking Wave,” but I am not a huge fan of the original version on the album.

Other favorites of mine off of Songs of Innocence are “Iris” just because it’s so damn personal about Bono’s mother, “Raised by Wolves” because I love the chorus when Bono belts out “RAISED by wolves!,” “Sleep Like a Baby Tonight” because it’s just so ethereal, “The Miracle (of Joey Ramone)” because it was the first song I heard, “Crystal Ballroom” because it reminds me of Pop, and the alternate version of “The Troubles” because I swear I can hear Larry singing the chorus with Edge.

Some random thoughts after finally playing the physical version of Songs of Innocence, both the deluxe double cd and double vinyl LP. When playing side 4 of the record (yes I have a record player and most of U2’s albums on vinyl), change the speed to 45 rpm to listen to “The Crystal Ballroom 12″ Mix.” Otherwise you will be freaked out by Bono’s creepy, low, slow voice. Make sure to listen to the very end of disc 2 because after the alternate version of “Sleep Like a Baby Tonight,” U2 included “Invisible,” but did not put it on the track list – because it’s Invisible. haha get it? I would have included “Invisible” as one of my favorites off this album, but I don’t consider it a true part of this album. To me it is that one off single from the Super Bowl. I do love it though – “There is no them, only us.” If everyone truly believed that, the world would be a better place. In the liner notes, U2 dedicated Songs of Innocence to their former manager – “This album is dedicated to Paul McGuinness who was, and always will be, there for us.” And the liner notes close with “”We can spend our whole lives searching for cohesion, and in not finding it, turn the world into the shape of our own disappointment. Or not. There is no end to grief … that’s how I know there is no end to love.” On a less profound note, or maybe more so depending on your vantage point, why is there a space in the middle of “Son gs” on the cds? Is it a reference to Larry’s son Elvis, like Boy? Is the “gs” significant or just leftover from the “Son?”

Since I opened with Larry, I will close with Larry (as I usually do) and leave you with how Larry feels about Songs of Innocence. In his interview on KROQ, Bono said Larry is very pleased with the new album, and there are some great grooves on it. Bono said, “As long as the drums sound like the end of the world, Larry is happy. Have you ever heard the expression ‘Happy as Larry’?” Yeah, that’s my new tour tee shirt.

Here are some reviews of Songs Of Innocence when it was first released on iTunes over a month ago: 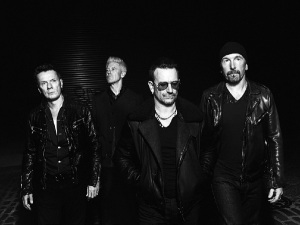 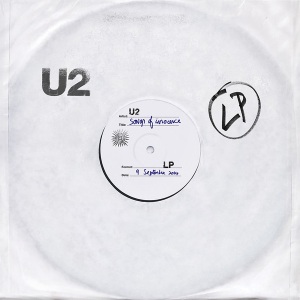 6 Comments on U2 “Songs of Innocence”