2015 is going to be the year of U2 – U2015, and it’s going to be magnificent. I will once again be traveling On the Road with U2 to Vancouver, Chicago and New York City.

2014 started off with U2 winning the Golden Globe for their song “Ordinary Love,” from the Nelson Mandela biopic Long Walk to Freedom. But unfortunately U2 did not win the Oscar for their Mandela tribute losing to a cartoon – that song from Frozen. A sad commentary on our society when a cartoon song wins over a song about a great leader. In between the Golden Globes and the Oscars, U2 made an appearance on Jimmy Fallon’s new Tonight Show playing both of their new songs “Ordinary Love” and “Invisible.” With all this momentum, it seemed U2 was going to release a new album and go on tour but then everything stopped … until September.

In September 2014, we finally saw the release of the new U2 album Songs of Innocence with a surprise free release on iTunes and the release of the deluxe cd and double vinyl in October. In November, Bono was severely injured in a bicycle accident, which caused U2 to cancel their week-long residency on Jimmy Fallon’s Tonight Show. In December, U2 played for the first time ever without Bono. It was in Times Square in New York City for World Aids Day on December 1. The performance, with Chris Martin and Bruce Springsteen subbing in for Bono, was dubbed “U2-1.” Two days later the tour was announced. It is called the U2 iNNOCENCE + eXPERIENCE Tour 2015, and it is pairs of shows in 19 cites across North America and Europe. In 2015, I am going to three of those cities, but am seeing 12 U2 shows.

In May, I am going to the U2 Tour Opener in Vancouver – I have GA tickets for both shows! I have always wanted to visit Vancouver as I am a big fan of the Pacific Northwest like Seattle and Portland. I haven’t been to a Tour Opener since Elevation. It is great because everything will be a surprise on that first night. I will have no idea what the set list will be or how the guys will use the new stage set up. I am flying out to Vancouver Wednesday May 13, arriving around noon. I’m staying at the Sandman Hotel right across from Rogers Arena. We are planning a U2 MeetUp that night – maybe even catch the lads leaving the final rehearsal. Thursday May 14 and Friday May 15 are the two U2 shows. Supposedly, one night will be a ‘regular’ U2 show and the second night will be an acoustic show – or something different. I fly out of Vancouver at 1pm on Saturday May 16. If you are going to the U2 shows in Vancouver and would like to join our U2ieTourVancouver facebook group, please click here. If you would like to RSVP to our U2ieTourVancouver MeetUp, please click here.

In June, I am spending an entire week in Chicago, one of my favorite cities! I am seeing four U2 shows – all GA! I am not sure whether I am flying or driving, but I will arrive in Chicago Tuesday June 23. I am staying at the Crowne Plaza Chicago Metro Downtown about a mile from the United Center. I am going to the U2 shows Wednesday June 24 and Thursday June 25, maybe a U2 fan MeetUp Friday June 26, definitely a U2 fan MeetUp Saturday June 27, and the U2 shows on Sunday June 28 and Monday June 29. I leave Chicago Tuesday June 30. I am not sure yet if my dogs Elvis and Cilla will be accompanying me like last tour. But I do know for sure that I am SO excited to meet all my new U2 Chicago friends and share this wonderful experience with them! If you are going to the U2 shows in Chicago and would like to join our U2ieTourChicago facebook group, please click here. If you would like to RSVP to our U2ieTourChicago MeetUp, please click here.

In July, I will be in New York City for 10 fun-filled days seeing six U2 shows, including the last show in North American. I have GA tickets for all of these shows, except one – a seat in floor section 3 front row behind the stage. I will arrive in New York City Saturday July 18th via MegasBus and won’t depart until the following Tuesday July 28th. My friend has graciously invited me to stay at her place in Manhattan, but I have booked a room at The Wyndham New Yorker a block from Madison Square Garden just in case I become a burden – 10 days is a long time for someone to put up with me. I will attend the U2 shows on Saturday July 18, Sunday July 19, Wednesday July 22, Thursday July 23, Sunday July 26 and Monday July 27. On the four nights with no U2 shows, I would like to see a Broadway show, eat some authentic New York pizza and just soak in all the flavor of New York City.

Before the tour starts, I must finish my U2 memoir On the Road with U2: my musical journey. I have finished the first draft and currently writing the second draft, reworking it a bit. It will be on sale on Amazon by May, and I will have hard copies with me in Vancouver, Chicago and New York. Just like on the 360 Tour, I will journal my experience everyday in my blog here as well as live tweet everything on my Twitter @OnTheRoadWithU2.

Happy New Year! It’s going to be a great one! 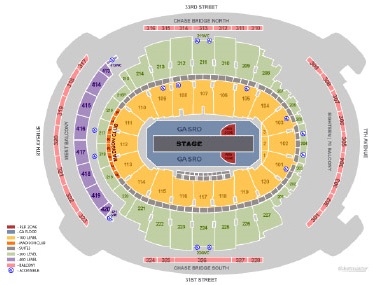