The U2 360 show in Philadelphia was a great show, made even better because I shared it with my old Elevation tour friends as well as couple new friends from the 360 tour. U2 brought back the original version of Magnificent, not the remix version. They haven’t played Magnificent since Anaheim1 on June 17th. It took the place of The Fly, but in the 6th spot in the set list not the usual 2nd. U2 ended the show by singing Happy Birthday to Nelson Mandela.

I took a cab from my fabulous Hotel Palomar to Lincoln Financial Field around 3. I walked around the stadium and ran into Ayaz, Kim and Abbey – my friends from the Elevation tour. I finally arrived at the spot where U2 was going to drive in. Along the way, I met Christine and Natasha whom I’ve been talking with on Facebook. My friends Jenny and Tasha were also there. U2 drove in after 4pm. Bono came out to greet everyone, but the Philly fans got a little too excited and I couldn’t even get near Bono to see him, let alone talk with him. 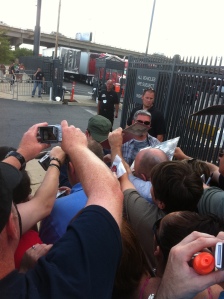 After sort of seeing Bono, Natasha and I walked back around the stadium and went to the front of the GA line to watch everyone enter. I got to talk with my new friend Beth for a little bit and finally met Anthony! I also got to catch up a bit with Cathal, author of Me and U2. We heard the crew soundcheck Breathe and U2 soundcheck Magnificent, so it wasn’t a real surprise when they played it. We went into the stadium after the enter GA line filed in. It was quite a complicated walk down to the inner circle, which was already pretty crowded at 5:30. In fact, Adam’s side was closed.

the beginning of the GA line

the crowded inner circle in Philly

We went into Edge’s side of the inner circle and stood behind the stage to get our spot to watch U2 enter the stadium and go on stage. Rob, another friend from the Elevation days, joined us – as did Jenny and my new friend Andrew. I met Chris who I’ve been talking with on Twitter. Jenny and I were wearing our ‘Larry Mullen Band’ shirts and Natasha was wearing her ‘It’s All About Drums’ shirt. Dallas said Hello, shook my hand and complimented me on my hat and then said, ‘its not about the drums its about the guitar.’ When Interpol walked on stage which wasn’t until after 7:45, the drummer noticed our shirts and pointed at us. Then after their set when they were walking off stage, the drummer gave his drumsticks to Jenny and said, ‘This is for my love of Larry.’

There was again issues with venue security moving us away from where U2 walks onto the stage, but we found Rocco and he straightened it out again for us like he did in Anaheim. It’s great that U2 and their crew really care about their fans. I just wish they would communicate better with venue security. I actually got decent video of Larry, Adam, Edge and Bono walking onto the stage – no feet and elbows this time. Please watch my video of U2 entering the Linc in Philly http://www.youtube.com/watch?v=xssqDRbOCcg 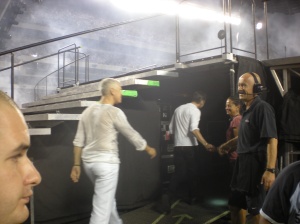 Adam and Larry go into the underworld

The inner circle was especially crowded. People were even in my spot on the back rail behind the stage. It was great to watch the show with my new friend Natasha and my old Elevation friends Jenny, Paola, Gina and Rob. It was the standard set list, except for the replacement of The Fly with the original Magnificent, Hallelujah into Streets (first time I heard it) and Happy Birthday to Nelson Mandela. At the end of the show, we went back to tunnel where U2 would exit. Larry again took off his shirt on the way to his car. On the way out of the stadium, I met Steve who I’ve been talking with on Twitter. It didn’t take too long to get a cab back to the hotel. U2 ended at 11:30, and I was back at my hotel by 12:30.

Please watch my video of Bono and Larry singing LET ME IN THE SOUND http://www.youtube.com/watch?v=gOsGP1rgOSs

Please watch my video of U2 singing Happy Birthday to Nelson Mandela http://www.youtube.com/watch?v=ijEPLa-nKaY

Please watch my video of an overview of the U2 360 show in Philadelphia http://www.youtube.com/watch?v=92U7Y0443rM

Today I’m going to relax in my lovely suite at the Hotel Palomar in Philadelphia and leave for the long 16 hour drive to St. Louis in the morning for the U2 360 show on Sunday.