Day 14 of my U2 360 tour across America was a lucky one for me – lucky at the slots that is. I returned to my hotel room this evening with the same amount of money I left with this morning.

My mom, my aunt and I started off our day with a yummy, filling breakfast at our hotel restaurant. Then we took our free hotel shuttle to the Reno strip, just a mile away.

We moved across the street to the Silver Legacy, which is also a huge casino but a little less crowded. I found four more Hot Shots to play. It was almost noon, and I put my last $20 into the 4th Hot Shot slot. I won back about half of my money I had lost. 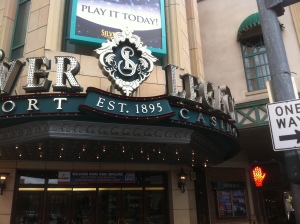 Feeling a little relieved that I had won some of my money back, we went down the street to Harrah’s. This was a smaller casino. I was surprised that Harrah’s was smaller than the other casinos that I have never heard of. I won back the rest of my money back on Double 7 Jackpot. Now that I was even, I wanted to take a break so I didn’t lose any money. 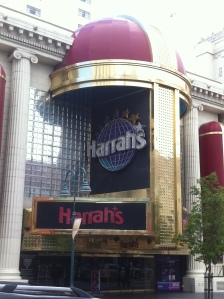 We went back to Elderado’s for lunch, but their buffet was closing at 2pm, which was very weird. And none of their other restaurants were open. So we walked across the street back to the Silver Legacy, and their buffet didn’t open until 4pm. So we ate at their Cafe Sadona, which was really nice. It was upstairs where the non-smoking slots were. We sat ‘outside’ overlooking the casino.

Since I was even, I thought I would play a little more. I walked down the hall not realizing I was crossing into Circus Circus. I played Sex and the City, Amazing Race and Rich Little Piggies slots and won some bonuses on each but kept playing until I was even again.

We got the shuttle and were back at our hotel around 5. After resting for a bit, we going to meet in the casino diner in our hotel, grab a bite and play a little more tonight. Hopefully I can stay even.