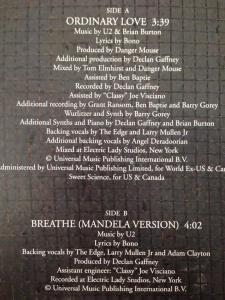 To most people yesterday was Black Friday, to me it was Record Store Day – the day U2’s new single was released! We have been waiting almost four years for new U2 music. We were teased over a month ago with a snippet of U2’s new song “Ordinary Love” in the trailer for the Nelson Mandela biopic Mandela: Long Walk to Freedom. Then last week we finally heard “Ordinary Love” in its entirety in a lyric video. And yesterday at long last “Ordinary Love” and a re-worked version of “Breathe” were available to us as a limited release on vinyl, if your record store had a copy.

Luckily my record store did! Actually, I didn’t even know I had a record store until a few days ago. Normally I would go to the Soundgarden, a great record store in Fells Point in Baltimore City. But for some reason I decided to google record stores that were closer to me. Low and behold, I found one about seven miles from my house. It is called Trax on Wax, and it is a GREAT store! It is located in the heart of Catonsville on Frederick Road.

I emailed Trax on Wax requesting to reserve U2’s new single. I was told they couldn’t hold “Ordinary Love” for me, but if I arrived early I should be able to get it. I arrived just a few minutes after the store opened and Gary, the owner, was right inside the door to greet me and immediately got my copy of U2’s new release – the only one in the store. As I was searching through the Elvis and U2 records, Gary told me his one and only U2 story (hopefully he doesn’t mind that I’m sharing it).

Gary went to the U2 Unforgettable Fire show in Washington, DC. Yes, that infamous show when Bono called everyone in the audience down to the stage causing U2 to get banned from that DC arena for years. Bono can’t help it, he just really needs that in your face interaction with his adoring fans. Anyway in the mad rush to the stage, Gary’s friend got hurt. Gary was so angry with Bono for causing this dangerous situation that he refused to use his backstage passes and meet the band. He did however talk with Paul McGuinness expressing his anger at the situation. The next day Bono called Gary to apologize. Yes you read that right, Bono called Gary to apologize.

I will definitely return to Trax on Wax, and not because of Gary’s story, but because it is a great store and there is lots more there for me to purchase. As if my three Elvis records, three U2 records, a complimentary Record Store Day 2013 poster wasn’t enough.

I was happy to realize that buying the vinyl “Ordinary Love” and b-side new version of “Breathe” also gave me the digital downloads. (Later I learned any U2.com subscriber can download the new songs.) I like “Ordinary Love.” It isn’t my favorite U2 song, it doesn’t give me chills or touch my soul, but it is exciting because it is new U2 music. Just hearing something new renews my U2 passion and has me gearing up for the new album and tour next year – and inspires me to finish my book. The new version of “Breathe” is alright. It is a nice acoustic song, but I need drums. I definitely like the original better. There is no opening drum solo for Larry to walk on the stage first as he did in 2009 on the 360 tour. Also, I like the lyrics of the original better. One of my favorite U2 lyrics of all time is from “Breathe” making it one of my favorite songs.

If you didn’t get a chance to get a copy of U2’s new release, you can listen to the new “Breathe” here. And in case you haven’t heard “Ordinary Love” yet, here is the lyric video.