Days 26 and 27 of my U2 360 tour across America were spent in Oakland and San Francisco. The day after the U2 show in Oakland, I just stayed in my hotel room napping, reading, watching tv and relaxing. Luckily I had enough leftovers, so I didn’t have to go out for food – just to walk the dogs. My hotel here is nice because it has free breakfast, free shuttle to and from the concert, and they delivered a microwave and refrigerator, but they have very thin walls. Everytime someone shuts a door or is talking in the hall, my dogs bark – even at 4am while I’m sleeping. So I haven’t really slept well since I’ve been here.

This morning I got ready and caught the 9:15am ferry from Jack London Square in Oakland to Fisherman’s Wharf in San Francisco. Unfortunately, there were about four large groups of children on field trips on the ferry and it was cloudy and cold when I arrived in San Francsico. Of course it was warming up and sunny as I was leaving to return back to Oakland. 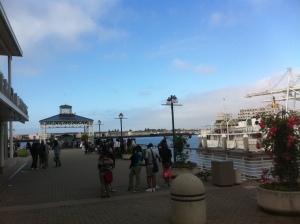 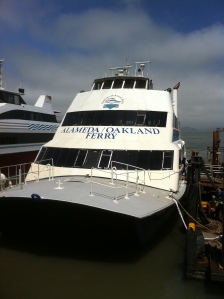 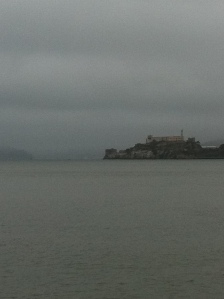 I spent my time in San Francisco at Fisherman’s Wharf, walking up and down and all around. I looked at the historical ships on Hyde Street Pier and had lunch at historic Boudin’s (sourdough since 1849). I could barely see the Golden Gate Bridge through the fog, but I could see Alcatraz and some good views of the San Francisco skyline and hilly streets. 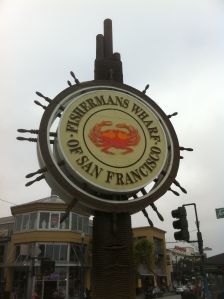 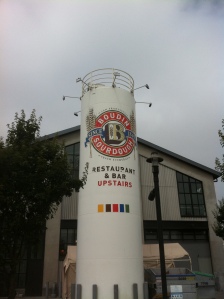 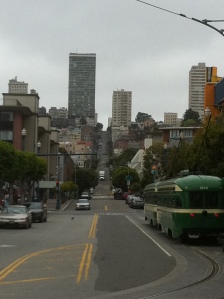 I am really looking forward to going to Palm Springs tomorrow, not only because I’ve always wanted to visit, but also because it will finally feel like summer. I’ve been cold since I left Memphis 27 days ago. It will be 99 degrees in Palm Springs tomorrow! Yay summer – finally!