Over 800 miles and 2 days later, we’re in Oakland, California. I’ll be in California for the next 13 days and am really looking forward to my time here! We left Seattle just before 1pm yesterday and arrived in Eugene, Oregon just before 6pm. It was the first day I drove to another city the day after a U2 show, and I was exhausted. It was also the first time I drove and it didn’t rain. And it was the first backtrack of my trip. I drove north on route 5 from Reno to Portland, and the past 2 days I drove south on route 5 from Seattle to Oakland.

Today is Cilla’s 4th birthday, and she spent it in the back of my car. She is relaxing in our Oakland hotel now though, as is Elvis. We left Eugene just before 9am and arrived in Oakland just after 6pm, stopping 3 times along the way. I was in such a good mood on the drive today. I’m not sure if it was a good night’s sleep or the memory of Larry’s smile walking toward me at the end of the Seattle show that kept me happily on my way today. Even the guy at the California inspection was in a good mood. He was a U2 fan. He said the U2 trucks came through a few days ago on their way to Oakland. 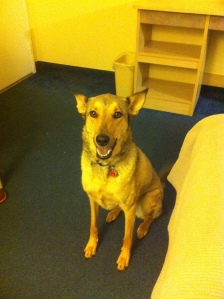 In addition to this being my U2 360 tour, this is also my tuna and pizza tour. I had the best tuna melt I’ve ever had at the Hotel VQ in Denver, had an ok tuna melt at Carrow’s in Reno, and a great tuna salad sandwich at Pike Place Market in Seattle. In addition, I’ve had tuna subs from various Subways along the way. I had a yummy pizza in Kansas City my first night on the road. I had pizza from the hotel restaurants at the Ramada Reno, Vintage Plaza Portland, and Monaco Seattle. The best of these was the margherita pizza in Portland. I also had domino’s pizza in Eugene last night because I was too tired to look for anything else.