My friends Tasha and Amy and I spent the 4th of July in Chicago walking up and down Michigan Avenue. We ran into some of our U2 friends, had lunch at the Purple Pig and hung out in Millenium Park before relaxing in our room at the Hotel Monaco. We had thought about going to the White Sox game, but decided against it. We should have gone because we found out later that Larry was there with the U2 360 crew. 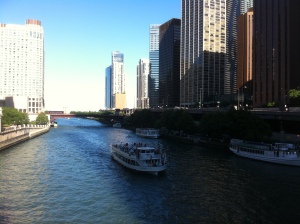 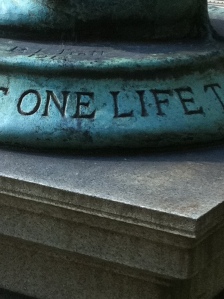 The U2 360 show in Chicago, which was my 70th U2 show since 1992, was amazing!!!! U2 played Out of Control, which they haven’t played in the US on the 360 tour! I like it so much better than I Will Follow. It has a better energy, much more excited. I had been wanting them to play it all tour. The shock of the night was when U2 closed the show with the spur of the moment addition of One Tree Hill, which they haven’t played in the US since 1987! I love One Tree Hill as it is off my favorite album The Joshua Tree. We met The Edge before the show and saw John Cusack watching the show. A great, great show – my favorite U2 360 show, along with Anaheim2. Soldier Field was the only venue where I saw U2 on two different legs of the 360 tour.

The day of U2 show in Chicago Tasha and I stayed in the hotel all morning and early afternoon. We had lunch in the hotel restaurant before going to Soldier Field. Since it is 2 miles from our hotel, we took a cab because we didn’t want to pay $46 for parking or get stuck in traffic after. We arrived at the stadium around 2:30 and waited for U2 to arrive. We knew exactly where to wait because we were at Soldier Field in 2009 for the U2 360 opener of the US tour.

Around 5:30, U2 arrived at Soldier Field. I’m not sure who arrived first because we couldn’t see who was in what car, except we did see Edge and Bono drive in. A few minutes later, Edge walked back out to greet the fans. I was surprised because it was a good 5 or 10 minutes after he drove in, plus no one had stopped to greet the fans since Bono did in Oakland almost exactly a month ago. Edge went to the other side of the street to sign autographs, so we didn’t think we would get the chance to meet him, but we did! He came to our side of the street and directly toward us. I had met Edge back on Elevation and gotten his autograph, so I just wanted a picture with him. Tasha asked if we could take a photo with him, but he said no. So we shook his hand – his guitar playing hand! I asked him if Larry was coming out. He said, “I can’t say for sure. I can’t speak for Larry.” I thanked him for coming out to greet us, but Tasha said it was too late and I had already offended him. I don’t think Edge had a sense of humor about it like Bono did in Seattle and Oakland.

After meeting The Edge, we went into the stadium, went to the bathroom, got a drink and was inside the inner circle by 6pm or so. I started out on Adam’s side because that’s where Tasha wanted to be, but it was getting too crowded for me where she was standing, so I left when Interpol started. I did not love Interpol, but didn’t hate them either. I would see them 5 more times. They never did grow on me, but they were alright. I went over to Edge’s side of the inner circle because I wanted to watch U2 walk onto the stage, even though there were coming out of the tunnel on Adam’s side. I finally got stable video of all 4 walking in and if I’m not mistaken Larry winked and waved to me. Please watch my video of U2 entering Soldier Field. 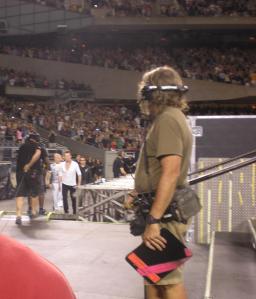 During the opener Even Better Than the Real Thing, I made my way back over to Adam’s side of the inner circle. Bono said, “Aw yeah ChiTown in the summer. Where ya gonna take us tonight?” Before The Fly , Bono said, “A whole side of Achtung Baby for you.” But it wasn’t. During The Fly, Bono again screamed “Achtung Y’all!” like in the ZooTv days. During Mysterious Ways, Bono sang a snippet from Trying To Throw Your Arms Around the World. I was really hoping for an all Achtung Baby concert at some point in the tour since it was the 20th anniversary, but that never happened.

After Until the End of the World, instead of I Will Follow, U2 played Out of Control – finally! I had been wanting to hear Out of Control the entire tour. It is such a great song, so much energy, so much better than I Will Follow. I went nuts as soon as it started! Bono mentioned that it was their first single and he had met the love of his life the same time he met Larry, Edge and Adam. After Out of Control, U2 went right into Get On Your Boots. This was an amazing back to back combo of songs full of excitement and energy. It was at this point I knew that the Chicago show was going to be my favorite of the 360 tour – tied with Anaheim2. Please watch my video of Out of Control.

Get on Your Boots

After Get on Your Boots, Bono started talking. This is usually the part where he introduces the band, but he talked about them more than actually introduced them. Bono said that Larry and Adam had been in Chicago for the 4th of July, just as Tasha and I were. Bono said, “Larry watched the White Sox win last night.” I knew I should have gone to that White Sox game! Bono introduced I Still Haven’t Found What I’m Looking For saying, “This is a single off The Joshua Tree for Island Records circa 1987.” Then in the middle says that John Cusack is in the house, “Happy Birthday John.” And at the end, dedicated it to Clarence Clemmons by singing a bit of Jungle Land. During Elevation, Bono said, “Take me to the other side. I’m in Larry Mullen’s band.”

After Hold Me Thrill Me Kiss Me Kill Me, we went back to get a spot to watch U2 walk out – we could see their cars waiting for them in the tunnel. We could also see John Cusack watching the show! After With or Without You, Bono said that two days ago was the 25th anniversary of Greg Caroll’s death and they had written a song about it, but they weren’t going to play it. The crowd booed, so Bono said they would discuss it and maybe play it after Moment of Surrender. They played a snippet of One Tree Hill after and then Bono said, “Ok here’s the deal. If we screw up really badly, you can’t put it on the internet. Fair?” Then Edge was trying to figure out how to play it and shouted, “For fuck’s sake!” Luckily for us Edge figured it out and U2 played One Tree Hill for the first time in the US since 1987. It was amazing, especially when the drums and bass kicked in! I went nuts. The Joshua Tree is my favorite album and I didn’t see the Joshua Tree tour because I was only 14, so anything played from it is a gift to me! Please watch my video of One Tree Hill.

U2 left the stage and made their way toward us. Adam waved to Tasha. Larry just walked by. As they were almost to their cars, Larry and Adam simultaneously took off their shirts and got into their cars! We walked the 2 miles from Soldier Field back to our hotel, and so did a lot of other people – there was actually a pedestrian traffic jam.

U2 360 in Chicago was such a fantastic show! My favorite of the tour, along with Anaheim2. There was a great energy in Soldier Field and the inner circle was really crowded, even where I stood behind the stage. The set list for the U2 360 show in Chicago was as follows: Even Better Than The Real Thing, The Fly, Mysterious Ways / Tryin To Throw Your Arms / Independent Women, Until the End of the World, Out Of Control, Get On Your Boots, I Still Haven’t Found What I’m Looking For / The Promised Land, Stay – In the Wee Small Hours, Beautiful Day / Space Oddity, Elevation, Pride, Miss Sarajevo, Zooropa, City of Blinding Lights – My Kind of Town, Vertigo, I’ll Go Crazy / Discotheque / Life During Wartime, Sunday Bloody Sunday, Scarlet, Walk On – Battle Hymn of the Republic, One, Will You Love Me Tomorrow / Where the Streets Have No Name, Hold Me Thrill Me Kiss Me Kill Me / My Kind of Town, With or Without You, Moment of Surrender / One Tree Hill, One Tree Hill.

Tasha left, and I spent the next day in my hotel room, which is the best way to spend the day after a U2 show. I had a week before my next U2 360 show in Philadelphia.