The U2 360 show in Salt Lake City was fantastic – better than the opener in Denver, even though I didn’t get any Larry love. The audience at the University of Utah was so much more into the show than the crowd in Denver. The set list was the same except for the addition of Love Rescue Me and a couple other Bob Dylan covers in tribute for his birthday. I almost cried when they played Love Rescue Me as it is my 2nd favorite song off Rattle and Hum. I still really miss I Still Haven’t Found What I’m Looking For. All I Want is You is good, but doesn’t have the same uplifting inspiration as Still Haven’t Found. I love the addition of Pride though.

Before going to the U2 show, we went to Emigration Canyon and had lunch at the historic Ruth’s Diner. It was probably the best baked mac n cheese I’ve ever had. 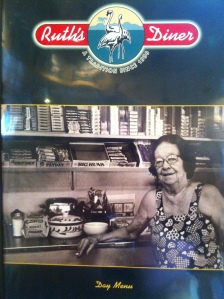 I left for Rice-Eccles Stadium just after 3pm and although it was only a couple of miles from my hotel, I didn’t actually get into the GA line until almost 4pm. It took a while to find the general parking lot and then to walk to the stadium from that lot. The good thing was that parking was free – free! That almost never happens at a U2 show. I wasn’t going to get in the GA line. My plan was to hang out for a bit in the GA line and then go wait out for the band to arrive, but I ended up talking to some people in the GA line and running into Jason, a friend I have been talking with on Twitter the past few months and finally got to meet in person. I also signed up (again) for the One campaign, talked to people about my trip to all the US shows and handed out some U2TourFans stickers. 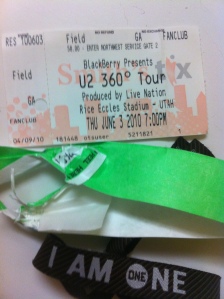 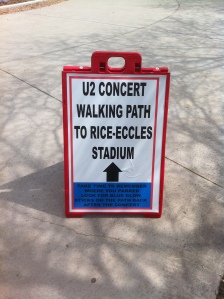 the long walk to the stadium 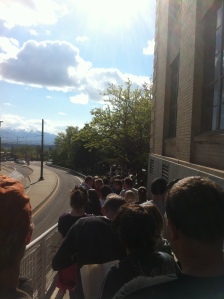 I decided to stand on Adam’s side of the stage in the inner circle. I had a nice view of the stage, but then it got so crowded. I think they let too many people inside, so I moved over more toward the side. I again ran into my friend Mike. I also ran into Matt and Melissa, my friends from Elevation. It was great to see U2 with them again. I decided to go over to Edge’s side to watch U2 enter again. Larry did not see me or wave to me this time though. I did get 4 photos of each band member entering, but they are blurry. I also got video of their entrance, but it is a little shaky. 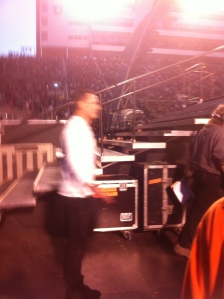 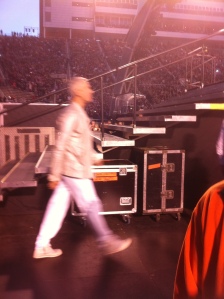 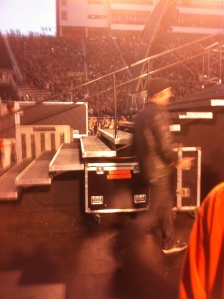 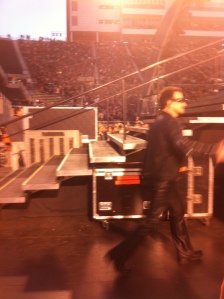 It was still light out when U2 took the stage. After watching U2 enter, I went over to Adam’s side to watch the show. Then I went back to the soundboard during Walk On to watch the end of the show. I have never seen it from the back. It’s really cool with all the screens and lights on the claw, and I especially enjoyed the Joshua Tree footage during Streets. 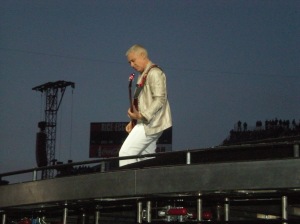 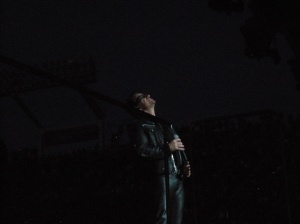 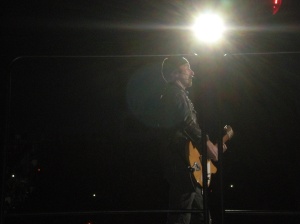 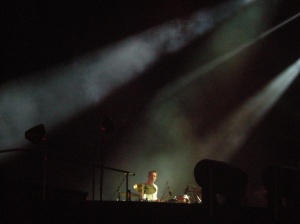 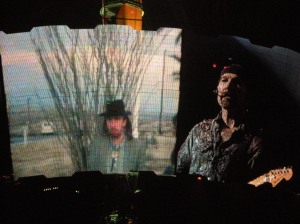 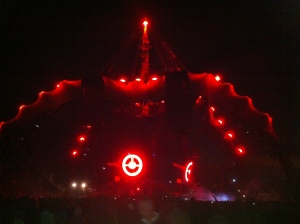 The set list for U2 360 in Salt Lake City on May 24, 2011 was as follows: Even Better Than the Real Thing, I Will Follow, Get on Your Boots, Magnificent remix, Mysterious Ways, Elevation, Until the End of the World, All I Want is You / Love Rescue Me / Happy Birthday, Stay, Beautiful Day / Here Comes the Sun, Pride, Miss Sarajevo, Zooropa, City of Blinding Lights, Vertigo, I’ll Go Crazy / Discotheque / Mofo, Sunday Bloody Sunday, Scarlet, Walk On / You’ll Never Walk Alone, One, Blowin in the Wind / The Times They Are a Changin / Where the Streets Have No Name, Hold Me Thrill Me Kiss Me Kill Me, With or Without You, Moment of Surrender.

The U2 360 show in Salt Lake City was almost perfect – great crowd, great performance, great experience! Highlight of this show for me was hearing Love Rescue Me for the first time – brought me to tears. Looking forward to my next 14 shows because I think each one will be better than the last. I have over a week before my next show in Seattle though. In the meantime, I’ll sight see in Salt Lake City, play the slots in Reno and Tahoe and check out the cool city of Portland. See you On the Road with U2!

Please watch my short of video of Larry and Bono singing LET ME IN THE SOUND http://www.youtube.com/watch?v=8GBQFdsNUpk

Please watch my video of Bono introducing the band http://www.youtube.com/watch?v=Z4AQIOyYLHE

Please watch my video of U2’s brief performance of Love Rescue Me http://www.youtube.com/watch?v=OqvPcQp3MaI

Please watch my video of the intro of Streets http://www.youtube.com/watch?v=OOHK3Jpv2dI