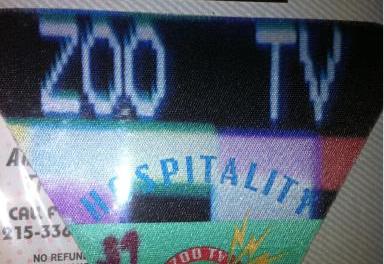 My final ZooTv show was on September 3, 1992 at Veterans Stadium in Philadelphia, Pennsylvania. There were two shows in Philadelphia and I was supposed to go to both shows, but was moving back to College Park so I only went to the second show. It was raining again, so they let the few of us waiting inside the Vet for sound check. We were also excited because our friend Maggie, who wrote a fanzine, got us Hospitality passes, but all that got us were some soda and chips. We didn’t see U2 back stage at all. But we did get to hear Whiskey in the Jar and When Loves Come to Town.

ZooTv Philly 9.3.92 Set List was as follows: Zoo Station, The Fly, Even Better Than The Real Thing, Mysterious Ways, One-Unchained Melody, Until The End Of The World, New Year’s Day, Whiskey In The Jar, Trying to Throw Your Arms Around the World, Angel Of Harlem, When Love Comes to Town, I Still Haven’t Found , Satellite of Love, Bad-All I Want Is You, Bullet The Blue Sky, Running to Stand Still, Where the Streets , Pride, Desire, With or Without You, Love Is Blindness, Can’t Help Falling in Love. 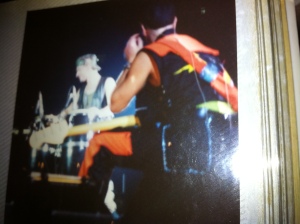 Larry and Adam in Philly