I did not want a U2 tour in 2017 – I wasn’t ready for it. After the last tour in 2015, I have distanced myself from listening to U2 – as I do after every tour. I get so entrenched (aka obsessed) I just have to go away for a while and dream it all up again. Also I have my 2017 completely planned out with two trips to Memphis (it is a very big year for Elvis and Graceland – the year of Elvis I was calling it. in fact, i’ve listened to nothing buy Elvis since September) and a trip to Florida for my mom’s 70th, so for me 2017 is not a good year for U2 to tour. Then I saw U2’s Christmas video …

I cried, yes literally cried, when I saw that video on Christmas day. I had to watch it five times before it sank in. (Then I had to watch it five more times to enjoy Larry being Larry.) Bono said, “to honor 30 years of The Joshua Tree, we have some very, very special shows coming.” He did not say there would be a new full fledged tour in support of the new album, even though he did say “we have Songs of Experience coming.” To me I think it means the new album will be out sometime in 2017 and U2 will be playing a few 30th Anniversary Joshua Tree shows in 2017 – I’m thinking around March 9th perhaps. There are rumors U2 are headlining Bonnaroo in June and playing two dates at MetLife Stadium in New Jersey, but who knows. All I know is Bono said “JOSHUA TREE” as he exited the video after they had decorated a JOSHUA TREE. I hope my interpretation is correct because I am ready for 30th Anniversary Joshua Tree shows, but I can wait until 2018 for the new Songs of Experience tour. I am sure we will soon find out.

I have written this story many times, including in my book On the Road with U2 – my musical journey, but here is how I got into U2 and more about my love for The Joshua Tree. U2′s The Joshua Tree was released March 9, 1987, and I was a freshman in high school. I had heard “With or Without You” and liked it. I realized it was by that same group who sang that song “Pride” I had heard before and liked. I had to check out to see what U2 looked like because at 14 it is very important to a have a crush on the band you like. I noticed a picture of U2 a classmate had. Larry stood out right away as the attractive one and someone whose pictures would soon decorate my locker. I immediately bought The Joshua Tree (and Under a Blood Red Sky). That summer, I remember walking along the beach in Ocean City, Maryland with my big boom box blaring “I Still Haven’t Found What I’m Looking For,” which immediately became my favorite song. I noticed U2 because of “With or Without You,” but I fell in love with U2 because of Larry Mullen and “I Still Haven’t Found What I’m Looking For.”

Even though I had all of U2′s albums, The Joshua Tree was all I listened to constantly from 1987 to 1991 (along with Rattle and Hum). Besides “I Still Haven’t Found What I’m Looking For,” my favorites off The Joshua Tree are “Red Hill Mining Town” (I was obsessed with this song!), “Running to Stand Still,” “Trip Through Your Wires,” “In God’s Country,” and b-sides “Luminous Times” (my second favorite song – still gives me chills after all these years), “Walk to the Water,” “Deep in the Heart” and “Spanish Eyes.” I love the b-sides of The Joshua Tree as much as, if not more than, the songs that actually made it onto the album. The Joshua Tree was also all I watched for five years. I taped everything off MTV – documentaries, videos, concerts, award show appearances and interviews. My favorite is the first U2 I ever taped off tv, the documentary Outside It’s America– I know it by heart because I used to watch it everyday. 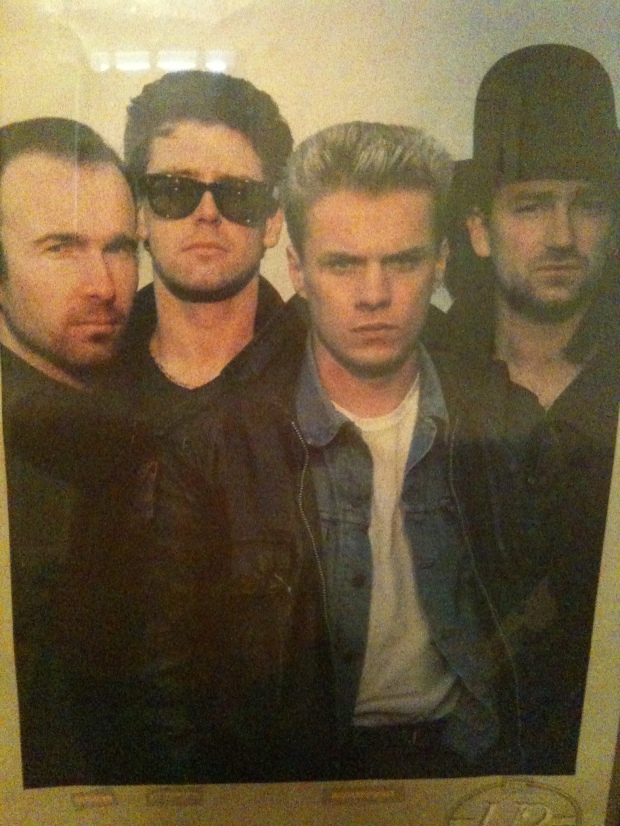 The Joshua Tree is still my favorite album. It is truly a part of me. It is ingrained in me. Its songs are second nature to me. Like being home, they are comforting. The Joshua Tree changed my life.