I left St. Louis around noon the day after the fantastic U2 show in St. Louis. In fact it was so fantastic that I didn’t get much sleep, so I only drove about 350 miles to Dayton, Ohio. I originally wanted to make it to Columbus, which was only about another hour, but I just couldn’t do it. So I ordered an amazing pizza from Donatos (thin crust and lots of cheese), settled into my Motel 6 room, and watched Bono and Edge on Letterman. 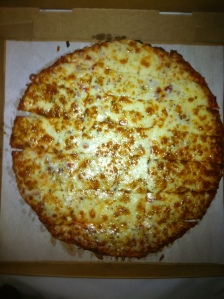 Unfortunately, I didn’t get much sleep Monday night either and I had to drive 600 miles to New Jersey. I left Dayton at 6am, stopped twice, drove across the Pennsylvania turnpike again and arrived in our hotel across the street from the New Meadowland stadium. 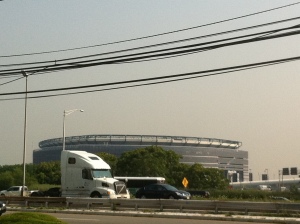 New Meadowlands Stadium from my hotel in New Jersey

I have 2 nagging questions from my drive. Question 1 – Am I the only one who obeys the speed limit? I set my cruise control about 5 over the limit, but when the speed limit is reduced I reset my cruise control. Apparently, everyone else just ignores the ‘reduce speed limit’ signs and continue on at 65. Question 2 – Why do the bathroom stall doors open in toward the toilet? There is so much room in between the stalls and the sinks that the doors should open out, not in where there is barely enough room, especially if you have any sort of bag, purse or suitcase.

Anyway, I got a great night’s sleep last night in our hotel in New Jersey and even took a nap a couple hours after I woke up. But I was awakened by the fire alarm going off, which was luckily a false alarm. Now, I am going to watch tv, order lunch and walk over to the Sheraton around 2 to catch the shuttle to New Meadowlands Stadium for the U2 show tonight.