Day 2 of my U2360USA tour brought us to Omaha, Nebraska today. We left Kansas City, Missouri at 6:30 this morning, drove 200 miles, and arrived at our hotel in Omaha at 9:30am. Just a few miles past our hotel, we passed the Kansas City Royals’ Kauffman Stadium and the Kansas City Chief’s Arrowhead Stadium. Then in St. Joseph, Missouri we past the Kansas City Chiefs training facilities. It was a cold and rainy drive up route 29. I’m going to try to remember how cold I was on the beginning of this trip when I’m in Miami on June 29th.

My mom and aunt landed in Omaha an hour after I arrived. They will be with me for the next two weeks. They will not be going to the U2 shows, but will probably go with me to the pre parties in Denver and Salt Lake City. I really like Omaha. It’s a much bigger city than I thought it would be.

Unfortunately, no pizza report from Omaha. My mom is not a big fan of pizza, and I’m trying to be social. I do still have leftover pizza from Kansas City though. So instead of a pizza review, I have a meat review in Omaha. Apparently you have to eat meat in Omaha, because I had it for lunch and dinner and I am a vegetarian – or at least I was.

We went to Old Market for both lunch and dinner. Old Market is this great little area of cobblestone roads and shops and bars and restaurants. For lunch we ate at Upstream, and I had a reuben, which I found out originated in Nebraska. It was so yummy and served with homemade mashed potatoes and gravy. For dinner we ate at the Twisted Fork, and I had a cheeseburger. It was amazing – dripping with garlic mayo. I have to admit that a veggie burger does not hold a candle to to a real cheeseburger – but the poor cow. I’m trying not feel too guilty or too much like a hypocrite. 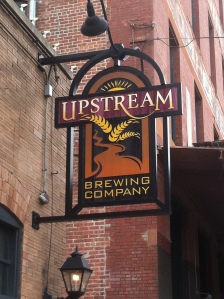 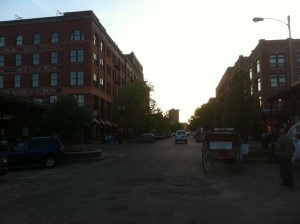 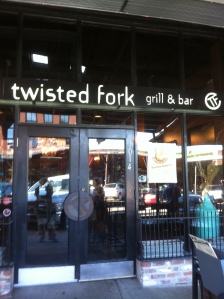 6 days until U2360 in Denver, but first Mount Rushmore!