I still hate Virginia! Traffic sucks! Left Mom and Dad’s around 11:15am and got to Charlottesville at 2:30pm. Had to wait in line to check in at the hotel for an hour. Then Tasha and her sister met me at the hotel. We left at 4:15 for the concert and didn’t find our parking lot at Scott Stadium at the University of Virginia until almost 6 – hate Virginia traffic. We stood inside the circle side stage – Adam side on the front rail, but literally on the side.

our view from the side front rail

Tonight U2 played No Line on the Horizon, which was the only difference from the DC show – but they changed the order. Bono sang the beginning of ‘Unforgettable Fire’ to Tasha and I before he went on the bridge. the vocals were turned up so loud that we could really hear Larry screaming the Hey Hey Hey’s during Boots. Bono said something about ‘Edge’s ass’ during ‘New Year’s Day.’ I followed Larry to the back during ‘I’ll Go Crazy.’ And we went to the back during ‘Moment of Surrender’ to see them leave but they went the other way. I got to see Abbey, Jennifer and Mike Elms. Muse opened. It only took us 5 minutes to get back to the hotel after the show. 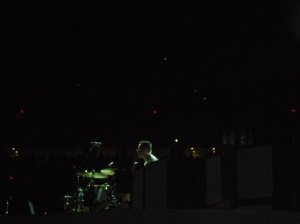 With or Without Adam

During the tour I said Charlottesville was my least favorite show of the 8 I saw, but after hearing the bootleg, it was a really good show. I was just jaded by all the traffic in Virginia.