My stay at the Hotel Vintage Plaza in Portland got even better and better. I literally made my upgraded luxurious suite our haven for 36 hours, only going outside to walk the dogs to the park – but I got a good feel for this liberal, dog-friendly city. It was nice just to do nothing after almost 3 weeks of going and going. 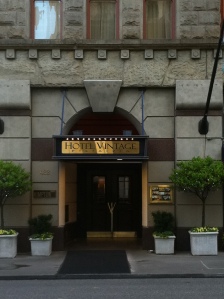 I used my 2 vouchers for Pazza Ristorante and ordered room service for lunch and dinner. I had the Verdure Panini for lunch and the Margherita Pizza for dinner. The panini was fantastic – yummy peppers, mushrooms, zucchini and goat cheese! And the pizza was equally yummy – with extra mozzarella.

This morning I finally got to meet Jeri, the General Manager of the Hotel Vintage Plaza, as well Georgie, Diva of Pet Relations. Georgie is much calmer than Elvis and Cilla. Jeri is the nicest, most generous person! She has contacted all the Kimpton hotels I’m going to be staying at this summer asking them to look out for me and treat me well. I don’t think anyone can treat me as well as Jeri though. Although Jonathan at the front desk is a close second. He left me a U2 cd for my drive to Seattle, as well as directions.

Before leaving Portland, I wanted to stop by the famous VooDoo Doughnuts. Sadly they were closed for renovations. My next stop was to check out Powell’s City of Books. It was open, but by this time, Elvis and Cilla were tired of waiting in the car, so I just kept driving.

We arrived in Seattle around 12:30 after passing by the Tacoma Dome, where I saw U2 10 years ago on the Elevation Tour, and passing by Qwest Field, where U2 is playing Saturday. The staff at the Hotel Monaco is just as friendly as the Hotel Vintage Plaza. They also had a welcome sign for Elvis and Cilla. I got everything I requested – a microwave, refrigerator, 2 beds since Jenny is staying with me and a room on the 2nd floor. But no upgraded suite this time because they are sold out. 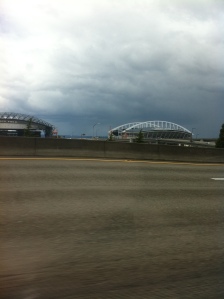 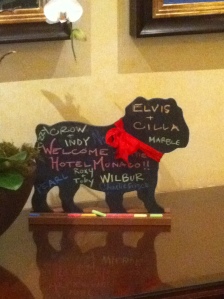 We’ve unpacked and are waiting for Jenny to arrive and then it’s off to the North American premiere of Killing Bono tonight at SIFF. Then tomorrow night it’s a U2 pre concert party at the Owl and Thistle featuring U2 tribute band Zoo Station. And of course Saturday it’s U2 360 at Qwest Field!!! LET ME IN THE SOUND!!!