Tonight Tasha flies in and then we head to Oklahoma. We’re gonna drive a few hours tonight and hit Stillwater tomorrow. Robin Ventura is getting inducted into the OSU Hall of Fame. He is Tasha’s favorite. He’s going to be in the parade. Then we’re going onto the Riverwind Casino that night in Norman. The U2 show is Sunday, Tasha’s birthday, at the University of Oklahoma. Then back to Memphis Monday and Tasha is staying through Wednesday.

What a day we’ve had! We left Ft. Smith, AR just before 9am. We arrived in Stillwater, OK around 11:30am. We were at OSU for their Sea of Orange Homecoming parade because Robin Ventura (tasha’s favorite), Garth Brooks and Barry Sanders were grand marshals of the parade and being inducted to the OSU Hall of Fame because they all went to school there. So after circling the campus a few times, we decided to park and eat lunch at Panera. Then we walked to where the parade began and waited for Robin, Garth and Barry to arrive and get into their cars, and then we followed along side them in the parade. After the parade, we followed this girl to the stadium where we discovered Robin, Garth, Barry were inside doing a press conference. They came out and we got to meet them. Robin came out first. I asked him ‘Will you please take a picture with her (tasha)? Her birthday is tomorrow.’ He said, ‘Yes.’ And put his arm around her tightly and said, ‘Happy Birthday early.’ I got the picture then they dispersed, so I only got one. We didn’t actually speak to Garth Brooks or Barry Sanders, but we got pictures. 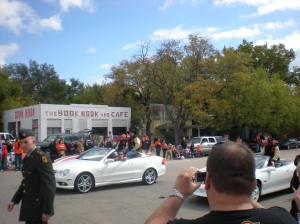 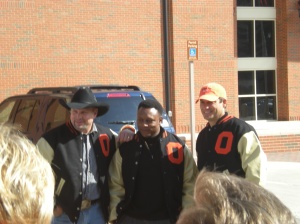 We headed for Norman, OK at the University of Oklahoma where the U2 show is tomorrow night. We went to the stadium to see the stage. We saw The Claw, but couldn’t tell if it was in the middle or one of the endzones. Then we came to our hotel at Riverwind Casino. We had a yummy dinner at the buffet then played some slots: devil something, star wars, fish something and viva las Vegas. I came out $30 ahead. I’ll probably go back in the morning. Now we’re in our hotel room watching the OSU game with hopes of seeing Robin.

The Claw in Norman

Tasha’s birthday was a good day. In the morning, we had our free breakfast buffet at the casino, and then I played the slots for over 2 hours while Tasha watched. I only lost $100 though. Not too bad. In the afternoon, we stayed in the hotel room watching football and eating pizza. We left for the show at the University of Oklahoma around 2:15. No traffic, easy parking. Waited out for the band. They arrived a little after 5. Bono rolled down his window and waved, but no one else did. Then we went into Oklahoma Memorial Stadium after the GA line. The stage was in the middle of the field, which is actually 360 – finally! But the circle almost took up the entire GA section. Not only was the stage in the middle of the field, but it faced the sidelines, not the endzone. The people in the front row of the seats, which were bleachers, were almost at the catwalk. 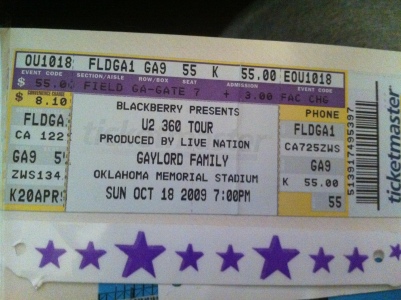 U2 arrive in Norman

This was my favorite show along with DC – definitely better than Raleigh. I had the same relaxed, happy feeling I did at the DC show. Highlight of this show was during ‘I’ll Go Crazy,’ I went behind the stage where Larry was going to be with his conga. Wearing my Larry Mullen Band tee, jumping up and down yelling Larry, and being the only one back there, Larry saw me, waved and nodded! Highlight/different songs were ‘In a Little While’, ‘Unknown Caller’ was back, ‘Until the End of the World’. We stood Adam side – directly side stage. We had plenty of room to stand and move around, which I did every time Larry did. I went behind the stage when Larry turned back for ‘Beautiful Day’ and ‘Sunday Bloody Sunday.’ Black Eyed Peas opened and were really good, better than Snow Patrol and Muse. The set list was:
Breathe (behind stage to watch Larry walk in)
Get on Your Boots
Magnificent
Mysterious Ways
Beautiful Day/GodOnlyKnows(behind stage to watch Larry)
Still Haven’t Found / Stand By Me
Stuck in a Moment
No Line on the Horizon
Elevation
In a Little While (total surprise)
Unknown Caller (finally back)
Until the End of the World (always fun)
Unforgettable Fire
City of Blinding Lights
Vertigo
I’ll Go Crazy (behind stage-Larry waves,smile,nods at me)
Sunday Bloody Sunday (behind stage to watch Larry)
MLK
Walk On – You’ll Never Walk Alone
One / Amazing Grace
Streets
Ultraviolet
With or Without You
Moment of Surrender (I yell Larry, he looks n leaves)
So the Norman show was amazing! One more u2 show and it’s all over – until next year!

our view from inside oklahoma memorial stadium 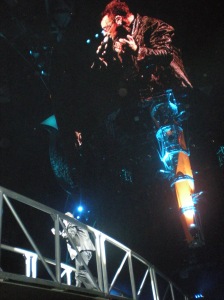 Bono up and down

Unknown Caller is back! 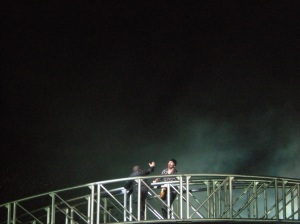 right after Larry smiled, nodded and waved at me