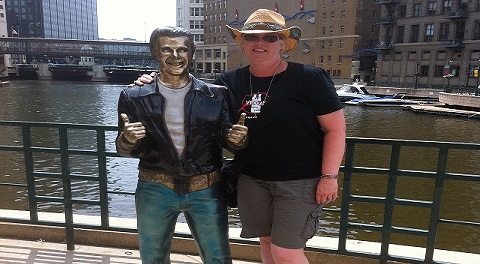 While other U2 fans headed to the shows in Montreal, I took a little break. After the fantastic U2 360 show in Chicago on July 5, I rested for a day in the hotel and then headed off to Milwaukee – only 90 minutes away. Luckily the fabulous Aloft hotel let us check in at 11:30am. I left the dogs in the room, put my sneakers on and walked around Milwaukee. I walked through the old historic German district to get to my first destination – Bronz Fonz. My whole reason for visiting Milwaukee was to see the Fonzie statue. Happy Days has been my favorite television show since I was little. It took place in Milwaukee, although it wasn’t actually filmed there. Fonzie is on the Riverwalk along the Milwaukee River across from the Rock Bottom Brewery.

After admiring the Bronz Fonz, I talked with a local who told me all about Milwaukee. Then I walked about a mile to Summerfest, which is the largest festival in the world. It goes on for 11 days and has at least 5 stages. The entire festival was on concrete, so no mud. There were lots of vendors with food (great pizza from Zaffiro’s, drink, clothes, jewelry, etc. It was really great – actually as much of a fair as a music festival. I was there early, so I saw some of the unknown bands but they were very good. I saw Alison Scott from Minneapolis and this great band from Milwaukee, who I didn’t catch their name, but really enjoyed them. After they performed seven U2 songs were played at they changed the set for the next band: Pride, New Year’s Day, With or Without You, I Still Haven’t Found What I’m Looking For, Sunday Bloody Sunday, Bad, Where the Streets Have No Name. I stayed for all seven songs of course.

After a few hours walking around Summerfest, I started my mile and a half walk back to the Aloft hotel. I stopped by the Milwaukee Public Market, walked along the Milwaukee River on the Riverwalk and stopped at the Cheese Mart to get dinner. 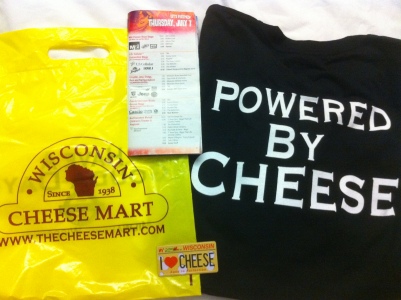 I loved, loved, loved Milwaukee and would move there if it didn’t snow from November through March – I am not a fan of winter. It still has the old architecture – not all modern buildings. It isn’t crazy crowded with traffic or pedestrians like Chicago. It is a clean city and the people were very nice. I just had a really great feeling there, like it was home. A feeling I’ve only had on this trip when I was in Palm Springs – similar feeling to what I have when I’m in Memphis and Maryland – home. Please watch my video of my great day in Milwaukee.

After my beautiful day (and night) in Milwaukee, I left for Canton, OH to visit the Pro Football Hall of Fame. I had to drive back through Chicago on my eight-hour drive from Milwaukee to Canton. I arrived at the Hall of Fame just after 3:30. Since it wasn’t hot, I parked in the shade and left the dogs in the car while I toured the museum. They were fine as I was only in the Hall of Fame for about an hour because I was really only interested in the Denver Broncos stuff.

The first thing I saw when I walked in was a giant photo of Shannon Sharpe because he was finally being inducted into the Football Hall of Fame this year! They also had Shannon’s shoes with ‘Big Play Shay #84′ printed on the tongue and a plaque about Shannon being the #1 Tightend. Reminded me of a sign I made once and took it to the game. It read, “Shannon Sharpe #1 TightEnd, #1 in my heart.”

My favorite player John Elway was inducted seven years ago. There was plenty about Elway in the Hall of Fame including a display about ‘The Drive,’ a football commemorating his 50,000 yards passing, a replica of his locker and of course the bronze head for the enshrinement with plaque about his achievements. I couldn’t see Shannon’s bronze head because he wasn’t inducted until a few weeks after I was at the Hall of Fame. There was also mention of U2’s halftime performance at the Superbowl after 9/11. Please watch my video of my day at the Football Hall of Fame. 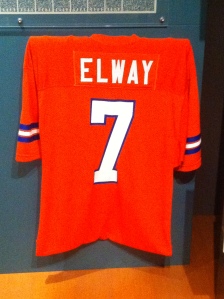 even U2 is in the Football Hall of Fame

my Football Hall of Fame stuff

I spent the next four days after Canton at my parents’ house in Ellicott City, Maryland. Unfortunately, my parents weren’t there, but it was still a nice little break from the road. On the way home, I stopped at Ledo’s for the best pizza in the world! While home I got the Saturn’s oil changed, did laundry, got groceries for my final two weeks on the road and had lunch with my best friend and her two daughters.

the best pizza in the world – Ledo’s

Cilla and Elvis happy to be home

I left for Philadelphia exactly two months after I had left Memphis to start my U2 360 tour, which was also the 26th anniversary of Live Aid also in Philadelphia. I had driven 14,362 miles so far. Growing up in Baltimore, I had been to Philadelphia many, many times, but never to that part of the city. I stayed at the wonderful Hotel Palomar in the arts district – many shops and restaurants all around. The staff at the Hotel Palomar was fantastic! They upgraded me to a one bedroom suite for my three night stay, complete with refrigerator, microwave, sleeper sofa, 2 flatscreen tvs, a separate bedroom and living room and a huge bathroom. They framed an 8×10 picture of Elvis and Cilla and left them treats, beds and bowls. They left me bottled water and fruit. It was a great hotel! 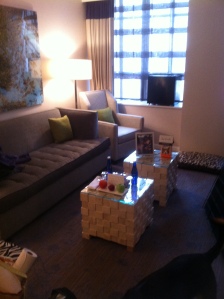 my suite at the Hotel Palomar in Philadelphia

After unpacking, organizing and having lunch, I took a cab to Festival Pier at Penn’s Landing to see Soundgarden. I bought a fanclub GA, so we were let into the venue before the regular GA. My friend Emily joined me in line. We got to the front rail on the left – Edge side. Basically the same place I was last year when I saw Soundgarden at Lollapalooza. I was talking with a guy named Andrew who also saw Soundgarden at Lollapalooza last year. He is the lead singer of a band called Shadowplay, which I have come to realize are very good.

After a crazy and an annoying opening band, Mars Volta, Soundgarden took the stage at 8:45. They played my favorites Spoonman, My Wave, Fell on Black Days, Rusty Cage, and Black Hole Sun.  They were great and seemed really excited that the Philly audience was so enthusiastic. Chris Cornell even said something like, ‘Finally a real crowd.’ Philly concerts are usually really great.  About halfway through the show after Fell on Black Days (my favorite Soundgarden song), I moved off the front rail. I just couldn’t take it anymore. The audience was getting a bit rowdy and crowd surfing. I thought I would move back or to the side to have some room. I kept walking back, but it never cleared out. It was jammed with people everywhere. I think it was more crowded than U2 GA. Festival Pier is just basically a parking lot – no seats anywhere, just a big concrete area. Please watch my videoof the Soundgarden show in Philadelphia. 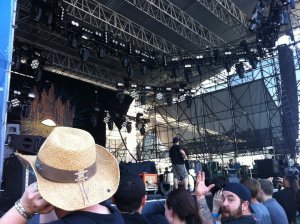 me on the front rail for Soundgarden 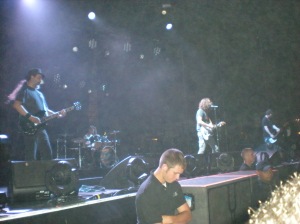 Soundgarden from the front 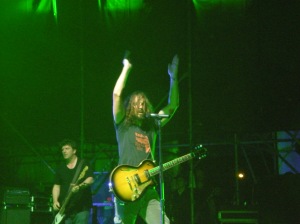 Soundgarden from the back

The night after the Soundgarden show in Philly was the U2 show in Philly. This would start my last leg of the U2 360 tour, with my final five shows in Philadelphia, St. Louis, New Jersey, Minneapolis and Pittsburgh. I wouldn’t be doing any sight seeing though, just driving back and forth to the concerts.