Primus and Disposable Heroes of Hiphoprosy opened the all the shows I saw on the ZooTv Outside Broadcast tour, except for the rehearsal concert in Hershey. Primus had a popular song called Jerry Was a Racecar Driver and U2 had been using Disposable’s Television Drug of a Nation to open their shows. This went along well with their television themed tour, complete with big screen tvs and Bono’s channel flipping. The setlist for the Outside Broadcast Tour was pretty much the same as the first leg with a couple of additions here and there. A few things that stand out in my memory are Adam introducing Trying to Throw Your Arms Around the World and the grocery cart, the belly dancer for Mysterious Ways, Larry twirling the trabant car light on the b stage for Satellite of Love, Bono’s grand entrance during Zoo Station, but mostly the Hallelujah chorus at the end of Running to Stand Still – it gave me chills every time, and still does. The ZooTV tour will always hold a special place in my heart as it was my first U2 tour. 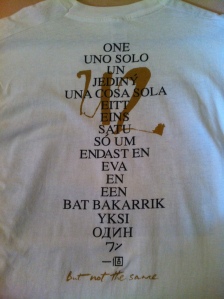 my favorite ZooTv tee (back) 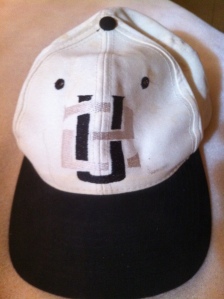 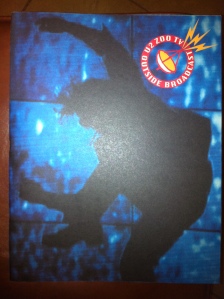 U2 released Zooropa the following summer. It was the first time I ever bought a cd, as opposed to a record or tape. Mike and I drove to Tower Records in Rockville, MD at midnight July 5, 1993 to buy Zooropa. It had a similar sound to Achtung Baby, but I didn’t like it as much. Although it had some great songs such as Dirty Day and The First Time. U2 did not tour America in support of Zooropa. I would have to wait 4 more years for a new album and another tour.